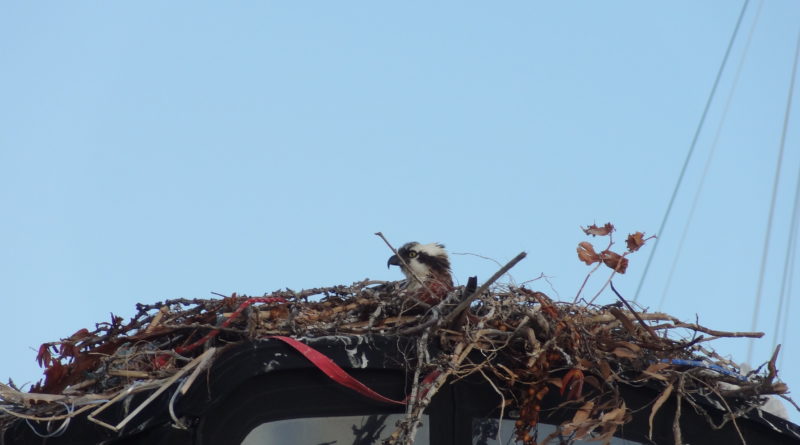 NEWPORT BEACH — A boat owner in Newport Harbor had unexpected guests aboard her vessel just ahead of Memorial Day weekend as reported by Dorothy Takahashi who found a male osprey atop a boat while cruising Newport Harbor in a dinghy.

Takahashi visited the harbor several times since discovering the osprey nest built atop the boat Pilar. She was not sure whether anyone actively used or visited the boat.

“I don’t see these birds very often in the harbor, didn’t know what it was, but thought it was some kind of bird of prey,” Takahashi said. “I have gone by several times and [on May 26] I saw the mother feeding the baby for the first time. It looked like a rather large baby, so I’m not sure how old it is, but it is the first time I’ve seen it. Mama was feeding the baby a lot.”

She had never seen a nest as large as the one atop Pilar.

“This is the first time I’ve ever seen a nest this big on a boat. I’ve seen small ones before,” Takahashi said. “It must have taken those birds a while to collect all that stuff for the nest, so I’m figuring no one’s used the boat in a while.”

As Takahashi, her husband and a few friends appreciated the osprey nest atop Pilar, the intersection of human and nature does not come devoid of laws and government oversight. State and federal laws prohibits anyone removing the nest of an osprey or any other bird from wherever the nest is built.

“Osprey nests are protected by California (Department of Fish and Wildlife) and U.S. regulations (U.S. Fish and Wildlife Service). In California, Fish and Game code sections 3503 and 3503.5 describe bird nest protection,” said Carla Navarro, a reserve manager with DFW. “Osprey nests are also protected under … the Migratory Bird Treaty Act. According to State and Federal regulations, an individual could not disturb an active nest. Such activity could be cited by [DFW] or [FWS].”

Specifically, Fish and Game Code 3503 explicitly states, “It is unlawful to take, possess, or needlessly destroy the nest or eggs of any bird.”

A subsection of the code prohibits the take, possession or destruction of any birds of prey, its nests or its eggs.

Interestingly enough, if the osprey’s nest fell off the top of the boat and into the water, it would unlikely harm any marine life.

“Most nests are woven from twigs and small branches. Dead vegetation introduced to a water body would not likely cause any adverse impacts,” Navarro said.

She added anyone witnessing the disturbance or destruction of an active nest should call DFW’s CalTip hotline at 866-844-8671.

FWS’s migratory bird policy and regulation can be found online at 1.usa.gov/1d01vbS.