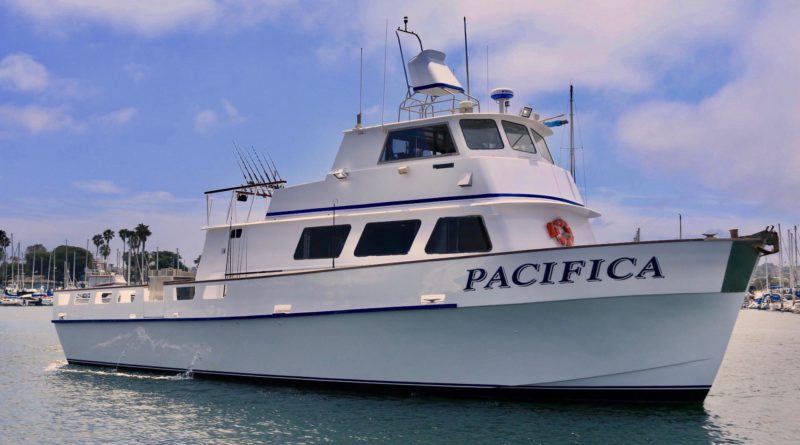 The sportfishing vessel was making its way home from a fishing trip when it beached just before dawn on June 28. Cause of beaching has not yet been determined.

SAN DIEGO—A sportfishing boat beached as it was returning from an offshore fishing trip south of Mexico, according to multiple news reports. San Diego’s Fox5 reported Pacifica was returning from a fishing trip in Mexico when it crashed onto the shores of Mission Beach during the early morning hours of June 28. There were reportedly 20 or 21 people aboard, with 15 or 16 passengers rescued off the boat by local lifeguards. The crew remained on board, according to news reports.

An official website detailing the sportfishing vessel’s specifications listed Andrew Viola as Pacifica’s skipper. Whether he was at the helm at the time of beaching has not been fully confirmed. Some sources familiar with the situation informed The Log stated Viola was the vessel’s formal skipper but did not provide any other information. Others stated Viola was not at the helm. The Log continues to look into whether Viola was indeed at the helm when Pacifica beached in Mission Bay.

Pacifica is a 65-foot sportfishing vessel owned by Viola, Drew Card and Markus Medak. It was built in 1978 and has a maximum capacity of 32 people. The vessel’s home is Seaforth Sportfishing, which is located at Mission Beach (1717 Quivira Road in San Diego).

An investigation of the beaching is underway; the cause of the crash was not immediately known or reported. NBC7 San Diego reported Pacifica was not damaged by the crash. The investigation will look into whether alcohol or sleeping at the wheel was involved, NBC7 San Diego continued in its reporting.

No other information was made available about the beaching of Pacifica.

The most recent fishing report had Pacifica returning from a 1.5-day trip on June 26, with 12 anglers aboard. The fish count for that trip: 18 yellowtails, nine bluefin and one yellowfin.

An overnight trip coming back to shore on June 24 had 30 anglers aboard; the anglers caught 21 yellowtails and 20 Pacific bonito.

Viola, by coincidence, was the captain of Prowler when it collided with Attessa IV in October 2018. The U.S. Coast Guard’s investigation of the collision, which occurred 9 miles off the coast of Imperial Beach, is still ongoing. At least one person died as a result of the collision.