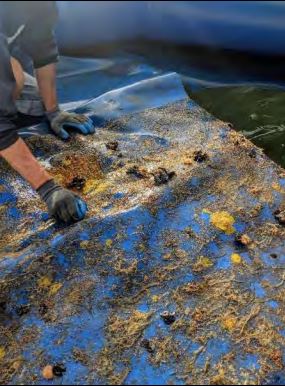 Los Angeles County Department of Beaches and Harbors tested an in-water dry docking system over the course of a year to get a better understanding of its capabilities, maintenance requirements and ability to serve as a potential alternative to antifouling paints. 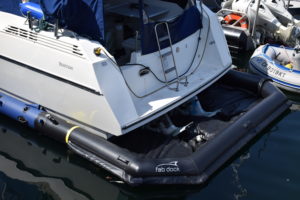 MARINA DEL REY—Los Angeles County Department of Beaches and Harbors (DBH) recently released a report summarizing a pilot program testing out an in-water dry docking system for its capabilities, maintenance requirements and ability to serve as a potential alternative to antifouling paints.

The county has been looking for ways to reduce the amount of dissolved copper in the harbor and in-water dry docking has been identified as one potential method. The harbor is on the state’s 303(d) list of impaired water bodies due to several pollutants, including dissolved copper.

The Marina del Rey Marina Toxic Pollutants Total Maximum Daily Load (TMDL) estimates approximately 94 percent of the dissolved copper is coming from passive leaching of antifouling paints, with the other 6 percent coming from boat hull cleaning. The county is hoping to reduce the copper in the harbor’s water column by 85 percent by March 2024. 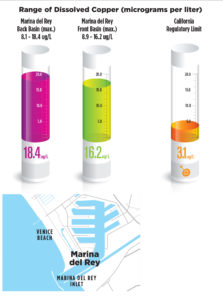 In-water dry docking systems work by separating the hull of the boat from the water without lifting the boat out of the water. These systems consist of a bottom liner that envelops the submerged hull of a boat, a floating frame and a pump to keep the hull dry when docked at the slip. The cost for a FAB Dock, an in-water dry docking manufacturer, ranges from approximately $7,000 to $21,000, depending on boat size. However, custom build models can cost as much as $55,000.

A local community group, the Sea Scouts, piloted one of FAB Dock’s in-water dry docking systems between Sept. 2018 and Sept. 2019. The Sea Scouts reported in the recently released “In-Water Dry Docking Systems Pilot Study Report” that the FAB Dock worked well, kept the boat bottom clean, and was easy to use. During the one-year pilot, the bottom of the device was never cleaned, and there was no need to clean the boat bottom while it was kept in the device, according to the pilot study report.

The Sea Scouts did report the FAB Dock was damaged towards the end of the pilot study, but did not disclose what had specifically caused the damage. The bottom of the liner had been punctured, possibly by the boat’s motor, the pilot study report said.

At the end of the trial period, the device was pulled out.

“The device was pulled out of the water by two men, without additional support, and without moving the boat out of the slip,” the pilot study report said.

Once out of the water, the larger fouling growth – tunicates and mollusks – on the bottom of the FAB Dock was removed by hand. The rest – such as algae – was sprayed off with a hose.

“The manual growth removal and hose rinse was effective, removing about 95% of the fouling,” the pilot study stated. “Organisms came off easily and did not leave any marks on the material.”

Photos of the marine growth on the FAB Dock after one year in the water in the harbor as well as more information collected from the pilot program can be found in the pilot study report at bit.ly/37MhoPQ.

The second was installed in October 2019. The boater volunteered to participate with a 2006 Safe Boat Defender, 26-foot length, 8-foot beam, with a twin outboard. Only one bid was received, which was from FAB Dock, at a cost of $10,735.

“It is the county’s hope that through implementing pilots of these options, other marinas in MdRH might be inspired to follow similar models of offering a dry docking system as an add-on service for slip rentals,” the pilot study report stated.