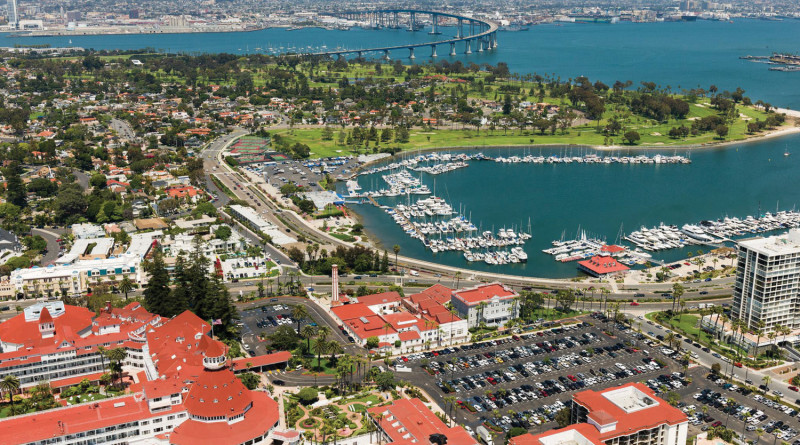 SAN DIEGO — Commissioners with the Port of San Diego and California Coastal Commission separately discussed future plans of Glorietta Bay Marina in Coronado during public meetings on March 8 and 9 in San Diego and Santa Monica, respectively.

Glorietta Bay Marina’s proposed boat launch ramp upgrades and Dock C extension were first up for discussion at the Port of San Diego Board of Port Commissioners meeting on March 8 where commissioners unanimously adopted a resolution designating the water use around the marina’s Dock C extension for recreational boat berthing instead of an open bay.

Port staff forwarded the approved resolution to the Coastal Commission for review. Commissioners are expected to accept the port’s resolution within the next two to three months.

Once the Coastal Commission approves the resolution port staff and commissioners will review and vote to approve a lease amendment, concept plans and a coastal development permit.

Construction of the Glorietta Bay Marina and Boat Launch Facility is expected to begin in the fall and be completed within six months, according to Wileen Manaois of the port’s real estate development department.

“It’s a well-used area. With the boat facility itself, it’s going to be … universally accessible,” Bonelli said. “A lot more people would be able to get on our bay.”

The Coastal Commission approved a permit for Glorietta Bay Marina’s planned upgrades at its March 9 meeting in Santa Monica, allowing Coronado and the port district to move forward with the demolition and replacement of Dock C, reconstruction of the boat launch ramp and public ramp, and expansion of a boat wash-off area, among other upgrades.

“The most significant benefit of this project is the increase in public access and recreation associated with the replacement of the public boat launch facility,” Coastal Commission staff stated. “The facility will include a new public dock that will accommodate the free temporary berthing of small and medium size vessels and allow for the tie up of non-motorized watercraft, a low free board for the launching of kayaks, paddleboards and rowing shells which will incorporate an Americans with Disabilities Act (ADA) compliant kayak launch, and a sandy beach that will allow for the passive launching of non-motorized watercraft.

“Both the Dock C and the public dock will be updated to comply with current safety and accessibility requirements. Additional benefits are related to water quality improvements from drainage at the boat wash-off area,” commission staff continued.

Upgrading Glorietta Bay Marina will have an impact on eelgrass due to dredging and shading. The Coastal Commission, however, has required Coronado to conduct pre-construction surveys and testing and establish an eelgrass mitigation plan.