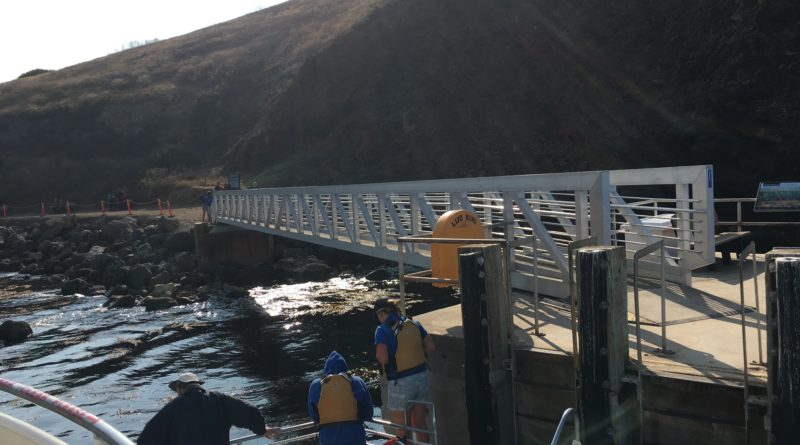 Boaters visiting Santa Cruz Island were given a sneak peek of what the new Scorpion Pier could look like. The current pier has generally been considered a challenge, posing safety risks and accessibility issues.

Anchorage is expected to be safer, efficient, sustainable and easier to access.

VENTURA — Channel Islands National Park, part of the National Park Service (NPS), provided boaters with a sneak peek of what a new anchorage at Santa Cruz Island could look like.

The NPS, on Aug. 16, announced the signing of the Record of Decision for the Final Environmental Impact Statement for the replacement of the pier at Scorpion Anchorage on East Santa Cruz Island. According to park officials, the new pier will provide safer, easier accessibility, efficient and sustainable access for all who visit this area of the island.

Channel Islands National Park (and NPS) released its plan in October 2015 to completely replace the aging pier at Scorpion Anchorage on Santa Cruz Island. Receiving public input for the project was a critical phase of the process, according to a park official.

“Public input always plays a big role in the development of any project in the National Park. We encourage individuals, organizations, and agencies to provide input. We assess and directly consider all of the comments before finalizing a plan to proceed,” NPS Public Information Officer Yvonne Menard said.

One of the challenges with the pier in the past has been reliable access during low tide conditions for ferryboat concessionaire, Island Packers Company, and National Park vessels.

It was ultimately decided to construct a longer, wider pier south of its current site, with an improved gangway for safer visitor access. There will no longer be a need to climb up a ladder, as has been the case since the pier was built.

Scorpion Anchorage is by far the most visited destination in the National Park with over 65,000 people choosing to recreate arriving there by personal watercraft or ferryboat transportation. This location is great for hiking, snorkeling, kayaking, swimming, camping, picnicking, and enjoying the wilderness.

Project timing and cost is not yet set, per Menard, this will be determined through the contracted company. Although there is not a set date for the bidding process to begin, Park officials are aiming for a project start date in fall, 2019.

The final EIS is available at: nps.gov/chis/learn/management/scorpion-pier-replacement.