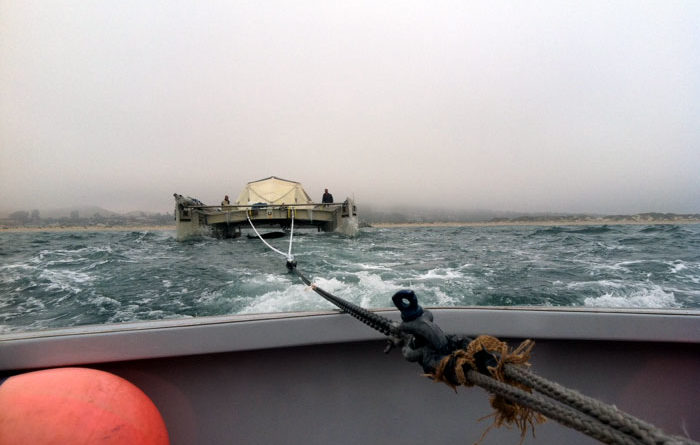 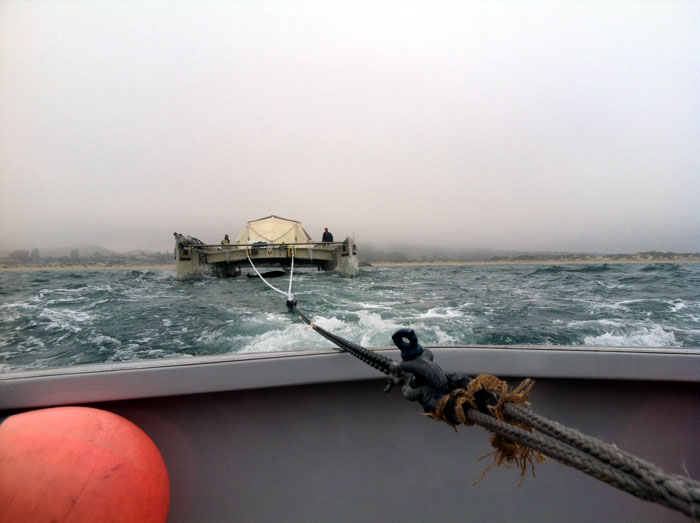 In 2010, Plastiki, a 60-foot catamaran constructed out of 12,500 plastic 2-liter bottles, made an 8,000-mile journey across the Pacific Ocean in an effort to raise awareness about plastic waste in the ocean.

While the trip grabbed headlines at the time, the boat has been out of the spotlight since making the San Francisco-to-Sydney, Australia crossing.

After sustaining some damage during the trip, the boat went through repairs in Sydney before being shipped back to Los Angeles earlier this year — a little more than 400 miles short of its intended destination — San Francisco. But, thanks to the helping hand of Vessel Assist Capt. Chase Henderson and his crew, the boat is back in its homeport and is expected to be on display during the 2013 America’s Cup.

In an interview with The Log, Henderson explained how his company got involved in towing the plastic behemoth from San Pedro to San Francisco, and the adventures along the way.

Henderson: “Although I had worked in other forms for Vessel Assist in the past, I was first hired on as a captain in 2009 by Vessel Assist Catalina at 18 — the minimum age to hold a Coast Guard license.

How did you get involved with towing Plastiki?

“Plastiki arrived in Sidney, Australia in July 2010. Due to damages caused by rough weather on the voyage down, the boat was set to be shipped back to Oakland. From my understanding, the shipping company mistakenly dropped Plastiki off in Long Beach. After legal debates, they agreed to cover the cost of having it towed to San Francisco.”

Who contacted you about the job?

“Plastiki’s co-coordinator contacted us early in 2012 inquiring about towing the vessel to San Francisco. Due to typically poor weather heading north in the wintertime, we put the tow off until this summer when we were likely to have better weather.”

What did you think of the plan?

“When I first heard of the job, I was very excited. I have done the run from Los Angeles to San Francisco before, but had never towed a vessel all the way up there. In April 2012, Robert Sherrill of Sherrill’s Repower Solutions repowered San Pedro — our preferred towboat for longer jobs — with a brand-new diesel engine. Having worked for Robert in the past and knowing him personally for more than 10 years, I had full faith in our equipment.”

What exactly was the job?

“We left San Pedro in tow on the evening of July 31 and arrived at Port Sonoma Marina around 2 a.m. Aug. 4. The total distance of the tow was 420 miles. The run back down the coast took 24 hours and was also about 420 miles. “

Is this something the company has done before?

“It is not uncommon for any vessel in our fleet to tow as far south as San Diego and as far north as Santa Barbara. However, prior to this tow, San Pedro had been as far north as Morro Bay, west to all of the Channel Islands, south to Ensenada and up to 150 miles offshore. Our towing range depends on weather and other variables; however, we have never been unable to complete a job due to range.”

Did you encounter smooth sailing the whole way?

“The first 24 hours of the tow was excellent. It was completely calm and the sun was out. But like clockwork, when we neared Point Conception, the wind speed increased and sea conditions worsened. Through that night, we faced 25- to 35-knot winds and charged uphill through very short interval 7- to 10-foot swell.

“The forecast called for the weather to deteriorate through that afternoon, so we tucked into Morro Bay for a rest and then continued north. The sea was rough that evening and laid down in the morning, just in time to see fishing vessels off Monterey Bay catching albacore all around us. We experienced much better conditions for the rest of the tow and a very nice trip back down to San Pedro.”

What was the hardest part of the trip?

“The hardest part about the job was all of the preparations. We made sure to have spare parts for everything that could possibly fail. I was never scared during the tow; I have 100 percent confidence in our vessel, and I would not put our equipment, our tow and myself in a situation where I did not feel comfortable.”

What did you bring for supplies?

“Gasoline and electric-powered dewatering pumps, 720 gallons of diesel, an extra 1,500 feet of tow line, spare parts for our engine and equipment, enough tools to nearly rebuild an engine and a lot of food.”

“One of my biggest concerns was losing the bottles used in the construction of Plastiki on our way up the California coast. The vessel’s mission is about raising awareness of marine pollution, not contributing to it. Losing any of those bottles would be catastrophic to the mission on Plastiki. Prior to the tow, Plastiki’s coordinator said the vessel had been repaired along with all of the netting supporting the bottles, which eased my concerns.”

Who was on hand for the tow?

“Capt. Shawn Slusser, our full-time captain for the San Pedro area, was on the towboat with me, while one of our deckhands, Clint Perdue, and the Plastiki expedition coordinator rode on Plastiki. We alternated shifts every four hours.”

Would you do it all again?