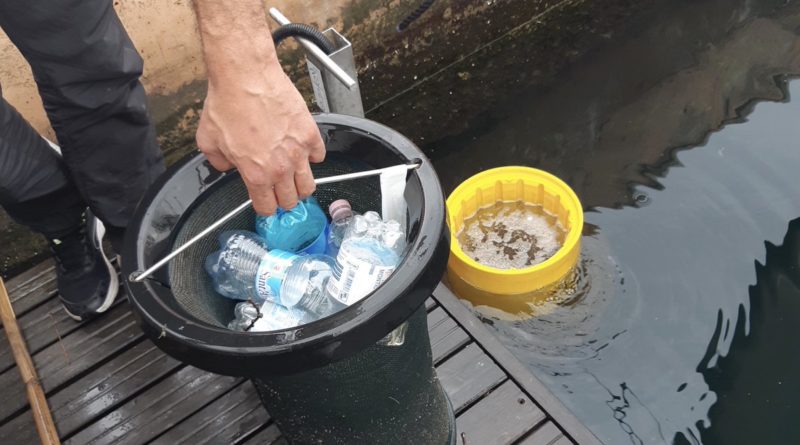 Seabin Project, which was created in Australia through crowd-sourcing, has partnered with 25 countries “to intercept floating debris.”

PORT HUENEME—Port of Hueneme is taking action to keep their waters clean. The port, over Memorial Day weekend, installed a revolutionary new device, known as a Seabin, to collect trash in the ocean.

The Port of Hueneme announced on its official Twitter page: “The Seabin started operation this weekend at the Port – a “trash skimmer” installed in a water body and acting as a floating garbage bin skimming the surface of the water by pumping water into the device. Keeping our waters clean and our environment green! @Seabin_project”

Attached to the Twitter post was a brief video of the Seabin performing its job at the port; the contraption, which looks similar to a pool pump, appeared to be fully operational. The bin has a removable portion with a netted surface that serves to separate the trash from the water as trash is pumped into the bin. Allegedly, the netting is so fine it can even collect microbeads from liquid soap products, which in recent years caused much controversy. Marina staff can remove the bin from the yellow pump portion of the Seabin and empty the trash just as they would a normal trashcan.

The official website states: “The V5 Seabin unit is a ‘trash skimmer’ designed to be installed in the water of marinas, yacht clubs, ports and any water body with a calm environment and suitable services available.

“The unit acts as a floating garbage bin skimming the surface of the water by pumping water into the device,” the website description continues. “The Seabin V5 can intercept: floating debris, macro and micro plastics and even micro fibres with an additional filter. By acting as a trash skimmer, the Seabin V5 is also able to clean the water from contaminated organic material (leaves, seaweed, etc…).”

Seabin Project was created as a result of a crowd-sourcing project, after two surfers from Australia grew tired of wading through so much trash in their oceans. The eco-friendly water-specific trash bins have been launched in 25 countries, which now include one of Southern California’s local ports: Port Hueneme.

Seabin Project’s mission statement is “to live in a world without the need for Seabins.” For anyone who spends time at the ocean (try even Googling ocean – there are bound to be several negative headlines about the Pacific Garage Patch and other pollution), marine litter has become one of the top problems in the world. Seabin Group aims to keep litter out of the water and cites, “marine litter should not be in the water in the first place.” If communities aim to keep the land clean, why not create a solution to keep our water bodies clean as well?

According to the website, 719 Seabins have been installed in countries all over the world. Reportedly 1,952.33 kilograms of rubbish is captured each day, with a grand total of 114,916 kilograms of trash picked up by Seabins to date.

Though the official website does not go into detail about the cost of installing a Seabin there is a section on the website for marina staff to inquire about installing the Seabin. Seabin Project also accepts donations to support the organization’s mission as well as scientific research. The Seabin Project, since 2015, has used a 50 percent for-profit/50 percent non-profit model.