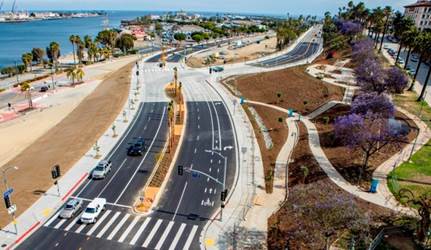 Los Angeles Harbor Commission President Jaime Lee added the port district’s next project would bring a new town square on the San Pedro waterfront online. The planned town square would be built where a marina and restaurants once existed.

“The town square and promenade is expected to begin in spring of 2019,” Port of L.A. staff stated in a release. “The new public promenade will run parallel to the Los Angeles Main Channel for more than a half mile, meeting the new town square at 6th Street, just east of Harbor Boulevard. The promenade and town square will include such amenities as public seating, landscaping, hardscaping, architectural finishes, handrails and lighting.”

San Pedro Public Market is expected to occupy 40 acres and cost about $152 million to build. Port district staff plans to open the new waterfront destination in 2021.

Harbor Boulevard’s improvement took about 18 months to complete. More than half of the project’s funding – $8.6 million – came in the form of a L.A. County Metropolitan Transportation Authority grant.