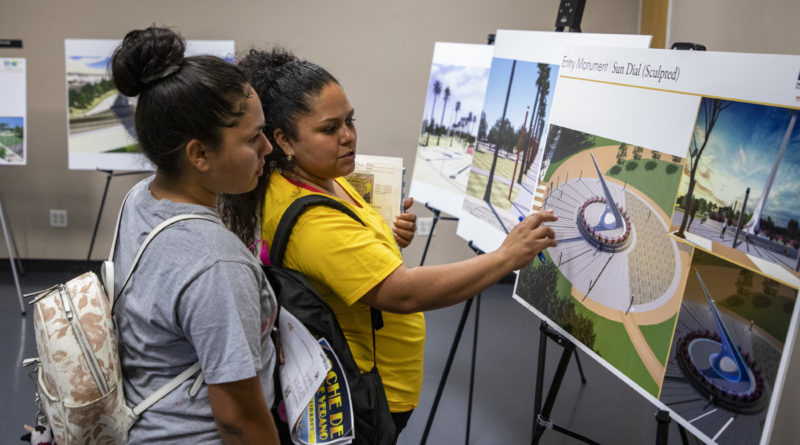 Wilmington Waterfront Promenade and Avalon Promenade and Gateway, two portions of the four-component project, were the focus at meeting; both projects have a total budget of $76.5 million.

WILMINGTON—The Port of Los Angeles hosted the first of two public meetings to offer feedback on the Wilmington Waterfront project, a waterfront revitalization endeavor that has been nearly a decade in the making. After finally coming to an agreement with Los Angeles Public Works Department (DPW) in February, the project is moving forward with an emphasis on green space, public dock replacement and more.

On July 25, Port of Los Angeles city staff met with the Wilmington community to discuss the next steps, such as naming the projects and highlighting historical elements of Wilmington.

Los Angeles Board of Harbor Commissioner Lucia Moreno-Linares gave an introduction to the meeting, stating, “Though it may have seemed like this has taken the Port a long time to roll out, the Port is dedicated to bringing [this project] to fruition in our very near future … I think with everyone’s contributions, we will be having a port of our importance – a world-class port – will now have a world-class waterfront.”

Elements planned for Wilmington Waterfront Promenade include the waterfront promenade, public restrooms, public pier, play area, realigning Water Street, replacing the public dock, adding a public plaza, parking and reconstructing the seawalls. Construction bids will be advertised soon, with Cisneros saying advertisement is likely in late summer. From when the bid is accepted, construction would start around six months later in 2020. The grand opening was estimated to be 2022 and the total budget is $52.7 million.

Avalon Promenade and Gateway, on the other hand, will have a pedestrian bridge with bike access, a promenade, historic walkway, landscaping, public parking and restrooms and commercial opportunities. The gem of the project, based on public input from 2017 to 2018, is the Entry Plaza Sundial, which is meant to be the focal point of the outdoor space. Cisneros stated that about 40 percent of the design had been completed. DPW will remove tanks to make way for the development; although DPW confirmed they would remove the tanks, the timeline of removal is still to be determined. The design is estimated to be completed within 18 months; construction bids and breaking ground would come at a later date once the tanks have been removed. This portion of the revitalization has a budget of $23.8 million.

The next and final meeting is slated for Thurs., Sept. 12 from 6-7:30 p.m. at Banding’s Landing Community Center in Wilmington.

In the meantime, community members are invited to provide feedback by way of the LA Waterfront Community Meeting Wilmington Waterfront Questionnaire, which can be found at bit.ly/2ZghV97. The document asks for suggested names for current projects, preference on the location of sundial (or complete departure from element), input on Wilmington’s history that should be highlighted and a section for general comments. Deadline to complete and email the questionnaire is Aug. 16. Completed questionnaires can be emailed to community@portla.com or lawaterfront@portla.org.