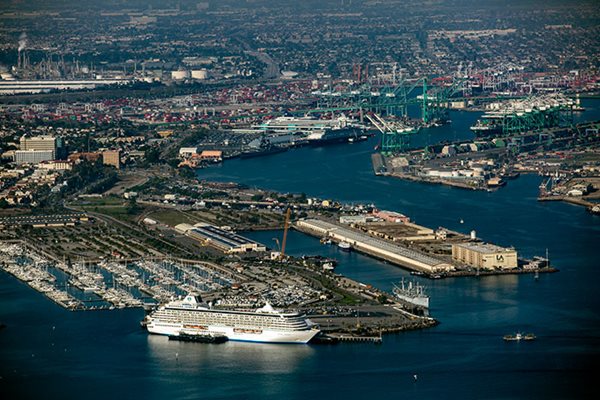 SAN PEDRO—The largest cruise ships serving the West Coast could be making port within a stone’s throw of Cabrillo Way Marina, as the Port of Los Angeles will issue a Request for Proposal (RFP) before the end of the year.

Port district staff announced a development opportunity for the Outer Harbor Cruise Terminal; the terminal is located next to Cabrillo Way Marina and a boat repair facility.  Also in the area is AltaSea, a public-private ocean institute bringing together business, education and science.

The port district has used the Outer Harbor Cruise Terminal space for concerts, special events and a temporary berth for cruise ships.

The RFP seeks cruise lines, terminal operators and real estate developers to create “a new state-of-the-art cruise terminal in a prime location for expansion,” according to a statement issued by port district staff. Outer Harbor Cruise Terminal is located at Berths 46 to 50 and occupies 13 acres of the port district.

“The Outer Harbor is the ideal location to handle the largest ships presently serving the West Coast market, with deep water, room to expand to handle larger ships and the closest terminal location to the open ocean,” port district staff said in a released statement.

Whoever is successful in gaining a contract with the Port of Los Angeles will have the opportunity to develop the Outer Harbor Cruise Terminal’s berths and landside facilities. The successful bidder will also manage the wharf and day-to-day operations of the terminal.

The development opportunity at Outer Harbor Cruise Terminal is the latest in a series of changes planned at the Port of Los Angeles. San Pedro Public Market will be built at the old Ports O’ Call location. A public space is also being planned for the Wilmington waterfront. Both the port district and city of Los Angeles are hoping the revitalization of the L.A. Harbor area – known as the L.A. Waterfront project – would help establish San Pedro as a visitor destination, similar to waterfronts in Santa Monica and Newport Beach.

General information about the L.A. Waterfront project is available online at lawaterfront.org. The Log will continue to provide updates of the revitalization projects in San Pedro and Wilmington as they develop.

Boaters at Cabrillo Way Marina are encouraged to contact Michael Galvin, the port district’s waterfront and commercial real estate director, at 310-732-3836 or mgalvin@portla.org with questions or concerns about the development opportunity at Outer Harbor Cruise Terminal.