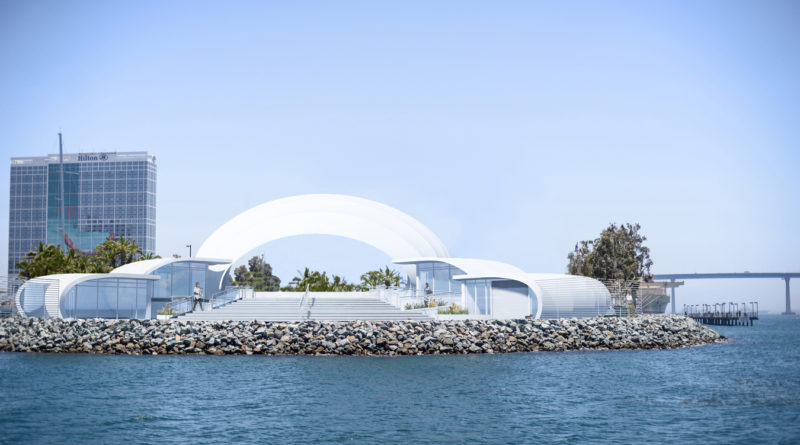 The 3.68-acre park will have a permanent outdoor stage for the San Diego Symphony as well as the opportunity for other events.

SAN DIEGO—Construction is planned to get started in September for an outdoor performance venue on a San Diego marina waterfront.

The Port of San Diego Commissioners on July 24 unanimously approved a lease for the San Diego Symphony Association’s Bayside Performance Park on a 3.68-acre area in the northwest section of Embarcadero Marina Park South. The lease includes three 10-year options and one five-year option, allowing the association to lease the park for up to 50 years.

The association currently uses the park land between the Marriott Marquis Marina and Fifth Avenue Landing for its Bayside Summer Nights concert series, which it started in 2004. The newly approved lease will provide a permanent home for the program in the same area, allowing the symphony to offer up to 55 full-day or 110 half-day events each year, year round. Currently, the events are only held between June and September. According to the lease, there will be unrestricted public access to Bayside Performance Park at least 85 percent of each year, with paid admission and rental events taking up no more than 15 percent per year.

“This partnership with the Symphony will support the port’s goals of a vibrant and active waterfront,” Port Director of Real Estate Tony Gordon said at the July 24 meeting.

Bayside Performance Park will feature a permanent outdoor performance stage with 10,000 seats and acoustic shell. It will also feature two pavilions for food, retail and/or other services, a 42-inch-tall perimeter fencing and restrooms. Boaters docked at Fifth Avenue Landing and Marriott Marquis Marina would be able to watch or listen to concerts at Bayside Performance Park while aboard their vessels.

The San Diego Symphony will also invest a minimum of $45 million in improvements, including maintenance and repair, landscaping, traffic and parking management and security 24 hours a day, seven days a week. The symphony will also contribute improvements to the rest of Embarcadero Marina Park South. Those plans include widening the existing public promenade around the perimeter of the Bayside Performance Park.

In additional to its ticketed concerts, the symphony will also offer free programming including rehearsals, music lessons, educational workshops and movies. CEO of the San Diego Symphony Orchestra Martha Gilmer expressed her excitement for the venue at the July 24 meeting.

“San Diego Symphony has dreamed for many, many years of a permanent venue on the bay, one that would be both the home for the symphony but also a destination for and a gift for our entire community.” Gilmer said.

The commissioners all expressed their support for the project at the meeting.

“It is a wonderful vision by the symphony leadership that will quickly become reality for everyone’s enjoyment,” Board Chairman Garry Bonelli said.

The only concern raised was what some commissioners called an ambitious construction timeline. Orchestra officials say they plan to start construction in September with the goal of opening Bayside Performance Park in the summer of 2020. The lease agreement requires construction to be complete no later than November 2021.