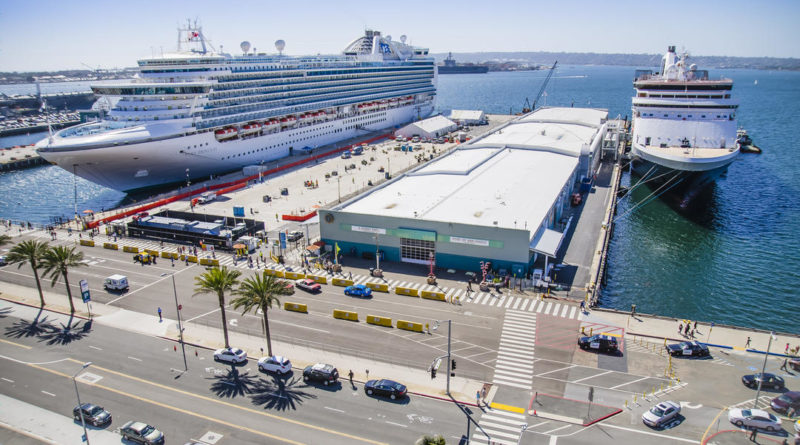 At least one marina in San Diego Bay could be removed in order to allow for more cruise ships to dock at America’s Finest City. Virgin Voyages is in talks with port district.

SAN DIEGO—The plight of small boat owners to have a place to dock has reached new heights, as the Port of San Diego is considering a new policy to accommodate the largest vessels of them all: cruise ships.

Port district officials are drafting a policy where at least one marina on the local harbor would be removed in order to make way for a new cruise ship dock, sources familiar with the situation but unauthorized to speak on the record told The Log.

The only question right now, according to sources, is whether any of the marinas have enough depth to accommodate at least two cruise ships at a time.

It is unclear which marina would be targeted – let alone whether the port district’s policy idea ever makes it out of the idea stage.

Details about the policy proposal are scarce at this time, but some information was shared with The Log in early March.

The new port terminal, if built, would be in close proximity to Downtown San Diego or the city’s international airport. At least two cruise ships must be able to dock simultaneously at the new terminal, should it be built.

Virgin Voyages has been branded as “Adult Cruising” and, as part of its inaugural year on the water, will be taking passengers to and from the Caribbean aboard Scarlet Lady.

Whether or not Virgin Voyages – or any other cruise line – would add new destinations out of San Diego might take years to realize, however. The port district must first engage with the public and local stakeholders about the plan to add two large vessels to San Diego’s cruise ship capacity. Then there is the California Coastal Commission to reckon with: will the strict state agency be on board with allowing at least two new cruise lines coming in and out of San Diego Bay – in addition to the lines already in town?

Also tempering discussions right now: Coronavirus. The COVID-19 pandemic is already hurting the cruise industry. Branson and others have been working to accommodate current reservations threatened by the spread of Coronavirus, both in the United States and abroad. Expanding operations in San Diego, in light of the pandemic, might have slowed talks about the new cruise terminal. (The Log, however, has not been able to confirm whether this is indeed the case.)

Hasan Minhaj of Netflix’s “The Patriot Act” already hosted an exposé episode on the ills of the cruise industry. Would the Port of San Diego’s pursuit of Virgin Voyages and other cruise lines inspire Minhaj to do a follow-up episode in America’s Finest City?

No one has formally went on the record with The Log with this story, but at least three sources familiar with the port district’s plans spoke to us under the condition of anonymity and said the new cruise terminal is being pursued to help raise funds for a new NFL stadium in Downtown San Diego.

San Diego Bay already has a terminal to accommodate two to three cruise ships. The following cruise lines berth at the Downtown San Diego terminal: Carnival, Celebrity, Crystal, Disney, Holland America, Norwegian and Princess. Cruise destinations to and from San Diego include Hawai’i and the South Pacific, Mexican Riviera and points south, and the Panama Canal.