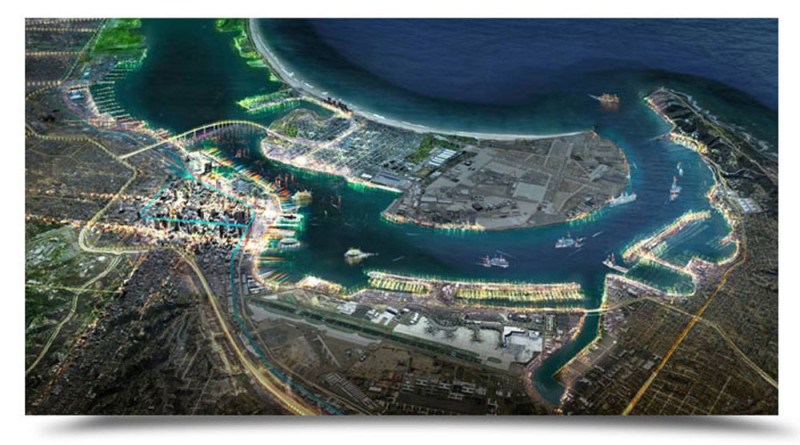 SAN DIEGO — The Port of San Diego’s Board of Port Commissioners continue to hash out plans for how the harbor will look during the next 50 years. Commissioners were presented with a framework report on Nov. 17 to help the port transition from planning to realize its vision to establish the harbor as a world-class boating destination.

Board members directed staff to rely upon its Integrated Planning Framework Report to guide the preparation of the Port Master Plan Update. San Diego’s large boating community could have access to a myriad of new opportunities and activities depending upon how the port’s master plan plays out.

“A key objective of the Integrated Planning Port Master Plan Update effort is to enhance the district’s financial sustainability by increasing the revenue potential on district tidelands through the creation of economic opportunities with a market-ready approach for development, and by streamlining the permitting process to increase the potential to implement development projects,” port staff stated.

Commissioner Bob Nelson said the port’s master plan should focus less on specific projects but instead on developing a set of principles to guide the waterfront’s future development.

“[It’s] not starting with, ‘what do you want to build here,’ but rather these fundamental things of the water and the public having access,” Nelson said.

The port lists five objectives potentially serving as its set of guiding principles: advancing a market-ready approach for development; limit how many master plan amendments are adopted for individual projects; eliminate piecemeal planning; ensure the port can maintain flexibility in choosing from a variety of projects to pursue; and, enhance the port’s fiscal sustainability while creating land and water uses within and adjacent to the tidelands.

Both commissioners and port staff said the master plan should be holistic and flexible. The district must be able to adjust plans based upon market demands and allow for expedited development but still allow for conservation and public access. Port staff added the master plan should allow the district to comply with its obligations under the Port Act and California Coastal Act.

“[The master plan] will allow the district to move away from ad hoc, project specific planning and instead, move toward a more holistic approach to longer-term planning that incorporates an economically driven objective,” port staff stated.

Commissioner Ann Moore said the port should continue to be aggressive in realizing its master plan and ensure the district involves its neighbors as partners.

“I don’t want us to lose sight of the vision that brought through this process,” Moore said. “I want to make sure we’re able to incorporate the projects, the ideas, the goals, [and] the principles into things we’re doing in the future, such as Harbor Island and Seaport Village.”

Working with its neighbors and ensuring the master plan focuses on the big picture is all part of the port’s vision to avoid piecemeal planning and setting the tone for how San Diego Bay will look like come the middle of the 21st century, Commission Chair Dan Malcolm said.

“We have the opportunity and obligation to plan for the next 50 years. We are looking for a port that is a world-class port,” Malcolm said. “Everything we are doing — the Green Necklace, open space, maritime businesses, our commercial spaces — it has to be world-class. Our standard is extremely high.”

An updated master plan document could take up to 24 months to complete. The port would then seek approval from the California Coastal Commission before working with the district’s five member cities — Chula Vista, Coronado, Imperial Beach, National City and San Diego ¬— to develop, fund and execute proposals.

“This won’t be an event. This is a process,” Vice Chair Marshall Merrifield said.