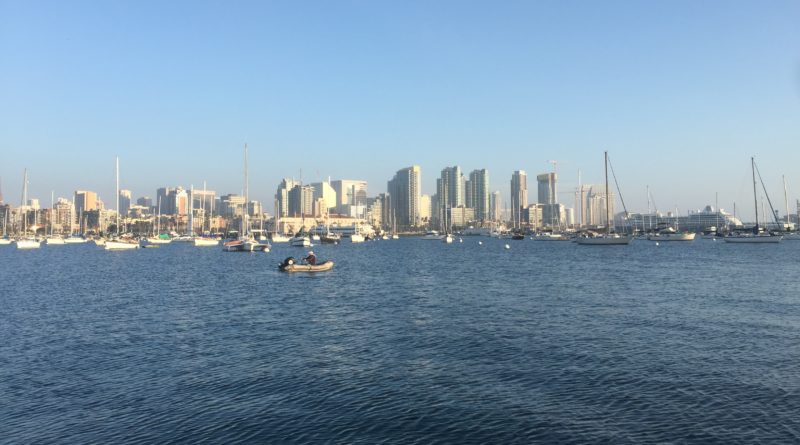 Commissioners and district staff hope to engage in a race to the top and develop a plan to reduce emissions and improve air quality for San Diego Bay.

SAN DIEGO—The Port of San Diego hopes to establish itself as a leader in advancing a clean air strategy for the waterfront it manages and oversees. This was the message made clear during a presentation made by port district staff, March 10. The presentation outlined a proposed approach for progression of a maritime clean air strategy for San Diego Bay.

Last month’s presentation was a follow-up of the Board of Port Commissioners’ 2019 resolution to update the port district’s 2007 Clean Air Program. The resolution called for the port district to align itself with the state’s goals in developing a local plan to reduce emissions and improve air quality.

Port district staff, in their March 10 presentation, outlined a “Maritime Clean Air Strategy,” or MCAS. The strategy was based upon research of the port district’s current emission reduction plans and comparing them to other ports in the state.

There are four elements to the port’s clean air strategy, or MCAS: augment the district’s 2016 “Maritime Air Emission Inventory” with additional data; assess the current state of emission reduction technologies and strategies; evaluate the feasibility of those strategies, from a cost and operational standpoint; and, develop various scenarios to “provide a range of achievable near-term and long-term emission reductions.”

“The MCAS will enable the [port] district to more closely align with the state’s air quality and greenhouse gas reduction initiatives,” port district staff said in a report to commissioners. “The state has a long history of regulating emissions and there are several important new regulatory concepts that are on the horizon. Many of the anticipated regulations under consideration by [the state] have operational and business implications to the goods movement industry.”

Port district staff, in developing a clean air strategy for San Diego Bay, studied similar plans developed by port districts in Los Angeles, Long Beach and Oakland. The ports of Los Angeles and Long Beach, as previously reported by The Log, established its Clean Air Action Plan in November 2017. The Port of Oakland, meanwhile, released its Seaport Air Quality 2020 and Beyond Plan in July 2019.

“Similar to the San Pedro Bay Port Complex and the Port of Oakland, the [port] district has relied on plans and partnerships to develop a variety of emission reduction projects and programs on port tidelands,” port district staff stated. “As laws, regulations and technologies continue to change, it’s important for the district to have a broad, comprehensive and flexible strategy that helps it prioritize clean air initiatives in a manner that supports maritime business objectives.”

The port district’s 2007 Clean Air Program set the tone for a variety of environmentally friendly policies, such as Shore Power at the Cruise Ship Terminal and at the Tenth Avenue Marine Terminal, a Vessel Speed Reduction Program, and a Clean Truck Program.

Commissioner Rafael Castellanos said the port district should be as shovel ready as possible and engage in a race to the top.

“We should be really aggressive on this,” Castellanos said. “[Let’s] embrace what’s inevitable and just lead. We might as well be the posterchild of the good actor.”

The port district will also be participating in the Community Emissions Reduction Program, or CERP. Portside Environmental Justice Neighborhoods was selected by the California Air Resources Board (CARB) to help develop an emission reduction program for the port district.

CERP was established by Assembly Bill 617 (AB 617), which went into effect in 2017. The program calls for the reduction of exposure to air pollution in communities most affected by such emissions.

MCAS, according to port district staff, “is intended to support a pathway to zero- and near-zero emissions for certain sectors and support the AB 617 … emission reduction efforts, including the development of the CERP.”

No board action was taken on this issue on March 10, as port district staff simply provided a presentation on the potential development of a clean air strategy for San Diego Bay.