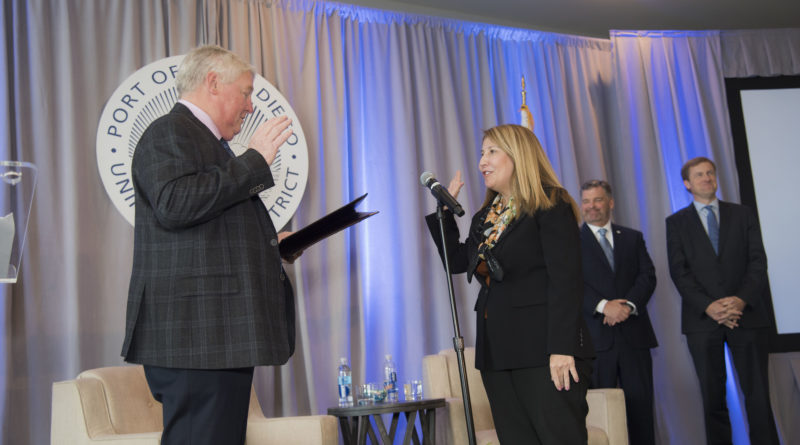 A new year means a new batch of leaders for the Port of San Diego’s Board of Port Commissioners. The port district announced its new board leaders on Jan. 9, with Commissioner Ann Moore being sworn-in as the commission’s new chair. Commissioner Michael Zucchet, who is the board’s most recent appointee, was sworn-in as vice-chair; Commissioner Dan Malcolm filled the secretary role.

The swearing-in ceremony was held Jan. 9 at the Intercontinental San Diego.

Moore’s theme as the board’s chair for 2020 is “Port of the Future.” She said she’d focus on making progress with the Port Master Plan Update and foster the “continued transformation of the Chula Vista Bayfront,” according to port district staff.

Reinvesting into the San Diego waterfront was also a priority Moore.

“I’m inspired by ports around the world that continue to reinvest in their waterfronts to keep them new and fresh to meet changing public needs,” Moore said. “Seattle comes to mind with its Pike Place Market and plans for a waterfront aquarium. The best waterfronts don’t remain the same and that’s how I see the Port of San Diego’s role for San Diego Bay – planning for the future while also being flexible so we can continue to evolve.”

Zucchet is the only member of the seven-person board to not have served as chair. As this year’s vice-chair, however, he would be on track to become the board’s chair in 2021.