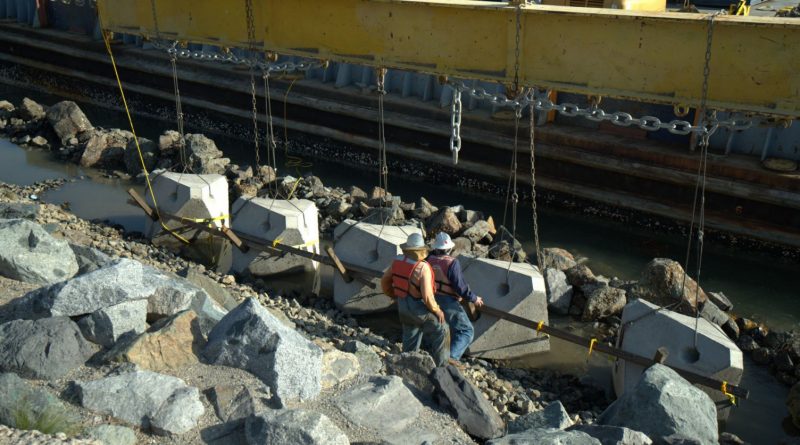 The interlocking armor units which mimic tide pools were installed in two locations on Harbor Island as part of a three-year pilot project.

SAN DIEGO—The Port of San Diego has begun testing out a new coastal armoring system which replaced traditional riprap with bio-enhancing concrete blocks that mimic natural rock pools. The three-year pilot project launched by the port district and eco-engineering company ECOncrete will demonstrate and study a new design of ECOncrete’s interlocking COASTALOCK Tide Pool Armor in two different locations on Harbor Island, a man-made peninsula only a few hundred feet wide. Installation of the technology was scheduled for Feb. 9, but was dependent on the tide conditions. Installation was anticipated to take a week for each site.

The COASTALOCK Tide Pool Armor is made up of individual blocks which connect together like Lego pieces. The units weigh about 6,000 pounds each and there’s a total of 72 blocks between the two Harbor Island locations. The tide pool armor runs 70 feet long and 12 feet wide at each of the locations.

The Tide Pool Armor replaced riprap rock mounds previously used to protect Harbor Island from storm flooding and erosion. In addition to protecting the coast, the new Tide Pool Armor is also expected to provide structural, ecological and community engagement benefits, including the promotion of marine organisms and restoration of local ecosystems.

The units are made of bio-enhancing concrete to promote algae, seagrass, barnacles, sea anemones and other growth, which will provide an eco-attraction for visitors and residents and also help to further stabilize the coast. Part of the pilot project will look at how long it takes for this living shoreline to grow. ECOncrete will also be evaluated every six months for the viability of the tide pool units as an ecological armoring replacement to traditional riprap.

“COASTALOCK is a fully load bearing, durable solution that changes the form and function of our developed coastlines – making them stronger, able to store carbon, while rejuvenating the precious coastal ecosystems, and inviting the local community to engage with their waterfront,” said ECOncrete Co-founder and CEO Dr. Shimrit Perkol-Finkel in a released statement on Feb.3.

Approved by the Board of Port Commissioners in 2019, the pilot project is the eighth to come out of the Port’s Blue Economy Incubator, a launching pad for sustainable aquaculture and port-related blue technology ventures that provides early-stage entrepreneurs with key assets and support services focused on pilot project facilitation. Castellanos said this is the first project people can actually see and interact with.

“There’s a little sidewalk next to the riprap where we’re putting in these two sections and they’ll be able to look over and see it with their own eyes, which I think is really exciting,” said Castellanos.

The Port of San Diego is the first to test out this newest edition of the COASTALOCK Tide Pool Armor. A previous version of the technology was installed in several locations, including Jaffa Port in Tel Aviv, Israel in 2019. ECOncrete reported that habitat forming algae had begun to grow two months after the Tide Pool Armor units were installed.