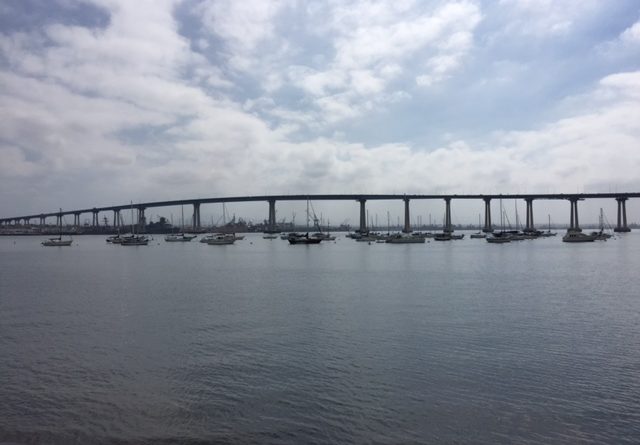 SAN DIEGO—The Port of San Diego and U.S. Army Corps of Engineers (Los Angeles District) will be working together to conduct a dredging project. The federal channel dredge will be conducted in the southern portion of San Diego Bay and is expected to begin in mid-February.

The federal channel to be dredged, which is located three nautical miles southeast of the Coronado Bay Bridge and near National City Marine Terminal and Sweetwater Channel, will have a channel depth of -35 Mean Lower Low Water (MLLW). It will be the first time this channel, which is near the Chula Vista/National City border, has been dredged since 1976.

There are three recreational boating marinas in the vicinity: Pier 32 Marina in National City and two marinas at Chula Vista Harbor.

Army Corps staff hopes the dredging project will be completed by March 31.

Long Beach-based Curtin Maritime Corp. was awarded the dredging contract; Curtin Maritime will be paid $2.9 million to perform the work, which, according to the Army Corps, “will be done with a clamshell dredge.”

“The area that will be dredged is about 5,700 feet in length and nearly 96 acres, adjacent to the National City Marine Terminal and Sweetwater Channel, and is located about three nautical miles southeast of the San Diego-Coronado Bridge,” Army Corps staff stated. “About 240,000 cubic yards of sediment will be removed from the channel, with about 175,000 cubic yards being disposed of at the LA-5 Ocean Dredge Material Disposal Site, located six nautical miles southwest of the entrance of San Diego Bay.

“The remaining 65,000 cubic yards of sand will be taken to the Coronado Nearshore Placement Site to nourish the adjacent Silver Strand State Beach. Placement of beach-quality material along the shoreline is a beneficial byproduct of the maintenance dredging project,” Army Corps staff continued.

San Diego Bay was fairly shallow until the late 19th century. Modifications of the bay, including dredging, began in the early 1900s and continued through 1950.

A separate dredging project will also be taking place in northern San Diego County, where federal officials awarded a contract to remove sand from the entrance of Oceanside Harbor. The sand will used to replenish portions of Oceanside’s beaches.

Contact Dena O’Dell, U.S. Army Corps of Engineers Los Angeles District Public Affairs, at 213-452-3925 or Dena.M.O’Dell@usace.army.mil, or Brianne Page, Port of San Diego at 619-686-6243 or bpage@portofsandiego.org for more information about the project.