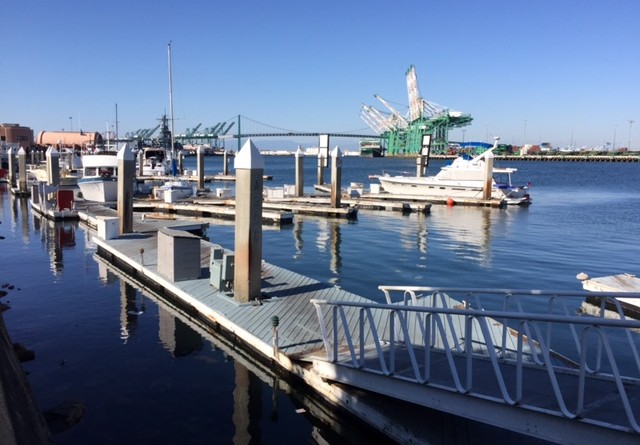 The dilapidated Ports O’Call Marina is on track to be ripped out as part of a plan to redevelop the area. A total of 92 boats slips will be lost as part of the project.Parimal M. Rohit photo

Plans for San Pedro Marketplace inch closer to reality with removal of 92 slips.

SAN PEDRO — Boating season officially came to an end in one corner of San Pedro this summer as the Port of Los Angeles’ Harbor Commission voted to move forward with the demolition of slips at the dilapidated Ports O’ Call Marina on Aug. 18.

The demolition of 92 slips will ultimately make way for the construction of Ports O’ Call Promenade and Town Square, which would serve as the home of the highly touted San Pedro Marketplace.

Demolishing the marina would cost about $500,000 while $150,000 is budgeted to tear down an existing building adjacent to the boat slips. The Los Angeles Harbor Department would pay for the entire demolition, which is expected to begin in November and be completed by March 2017.

“The floating docks … in the existing marina are in a state of disrepair,” port staff stated in a report to commissioners.

Assuming there are no appeals in the near future plans to demolish the slips, which have been vacated, the project would move forward as scheduled.

The city of Los Angeles did not assert jurisdiction over the matter within five council meeting days (as required by law), meaning the Harbor Commission’s decision is upheld.

However the Harbor Commission’s decision could still be appealed to the California Coastal Commission.

A handful of boaters who remained at the marina up until a few weeks ago have been accommodated for at other marinas in San Pedro or Wilmington, according to Mike Dibernardo of the port’s Marketing and Customer Relations Department.

Dibernardo said there are still 626 vacant slips in the port, meaning other marinas in the area would be able to accommodate recreational boats even after Ports O’ Call Marina is demolished.

The Coastal Act and port policy require recreational boating venues to be protected and not suffer from a loss of slips unless “demand for those facilities no longer exists or adequate substitute space has been provided.”

Most of the slips (55 out of 92) were occupied when the port assumed operational control of the marina on March 1. By Aug. 1 almost all of the slips were vacated; 51 of the 55 occupied slips were vacated and there were plenty of slips available in the Port of Los Angeles to accommodate the four remaining boaters, according to port staff.

Commissioners voted in January to end the leasehold between the city of Los Angeles and the marina’s operator, Ports O’ Call Corp. Dozens of boaters remained in their slips despite the leasehold termination and a decision to shut down the marina.

During the next three months many boaters, which at least one harbor commissioner identified as economically displaced, remained at the marina in hopes the city and port district would allow them to remain there or be properly accommodated elsewhere in San Pedro.

However the boaters were given notices to vacate and the city of Los Angeles was prepared to file unlawful detainer (eviction) proceedings against any boaters who were still in a Ports O’ Call Marina slip this summer.

At around the same time the Harbor Commission approved a 50-year lease agreement to allow for the redevelopment of the San Pedro Waterfront, which included a complete renovation of the area where Ports O’ Call Marina currently sits.

If all goes as planned the new Ports O’ Call Promenade and Town Square would be open to the public in 2020.

The marina, which had slips ranging from 37 to 74 feet, came into existence in the 1960s and became a part of the Ports O’ Call Corp. leasehold in 1976. The lease ended on Dec. 31, 2014 but Ports O’ Call Corp. continued operating the marina and adjacent land area on a month-to-month basis until January. City officials assumed operational control of the marina a few weeks later.