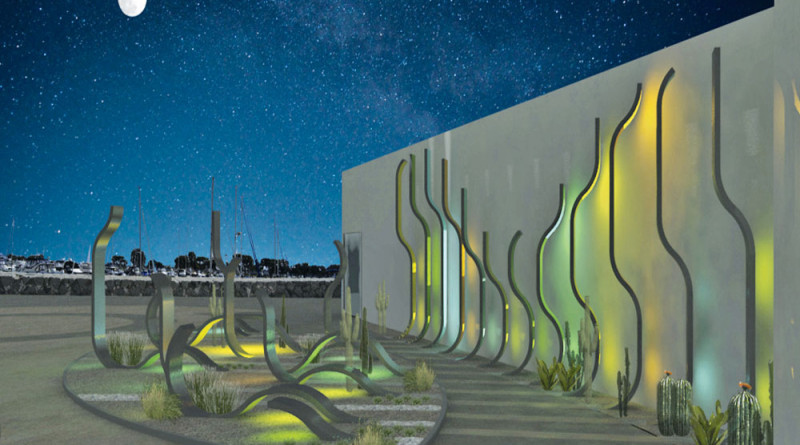 The Board of Port Commissioners approved last month concept proposals for three public art installations at the Marriott Marquis and Marina in downtown San Diego. Incorporating public art into the marina’s $200 million redevelopment project is part of the port district’s efforts to connect all waterfront visitors with artistic endeavors.

Each public art installation will promote the port district’s “Tenant Percent for Art” initiative. The policy requires any port tenant making improvements to its structures or venues to allocate at least 1 percent of its project budget to an artistic endeavor.

“The Board of Port Commissioners is committed to expanding opportunities for the citizens of California and visitors to the region to experience public art and other artworks resulting from the creative expression of artists,” the port district’s “Tenant Percent for Art: policy stated. “Such artworks have the ability to encourage artistic exploration of the tidelands and give art a key role in making the district’s mission and operations more understandable to the public at large.”

Marriott Marquis and Marina will be fulfilling its “Tenant Percent for Art” commitment by installing three pieces of artwork: “Tide,” “Kelp” and “Mountainscape.”

“Tide” will be an exterior sculpture with an LED lighting feature to illuminate waves artificially created from aluminum tubes and ceramic tile pavers; it will be located on Marina Walk on the harbor side of the hotel.

“The tubes and pavers are arranged in a serpentine strand of sculptural waves that crest and fall,” port district staff stated.

Also on Marina Walk will be “Kelp,” an environmentally-themed art display featuring painted strips of bent steel and LED lighting, according to port district staff. “Kelp” will be featured along the pathway of Marina Walk.

After Architecture of Los Angeles designed “Kelp” and “Tide.”

Located inside the Marriott Grand Ballroom’s pre-function area will be “Mountainscape,” a sculptural chandelier designed by artist Mark Smith and Swarovski. The indoor chandelier will be visible both inside and outside the hotel.

Plans call for the three public art projects, which were approved Dec. 8, 2015, to be installed before the end of summer. Marriott submitted its tenant art plan to the port district in September 2010. The art plan outlined five artworks to be commissioned by the hotel for $966,750.

Marriott Marquis is updating all of its guest rooms and renovating the marina, lobby, pool area and fitness center. The renovated hotel and marina will also feature a new restaurant, Marina Kitchen.

Marina Walk is another major feature of the new Marriott Marquis Hotel and Marina project. The 600-foot-long public promenade connects downtown San Diego to the harbor and marina space.

The hotel’s marina is currently home to 446 slips.