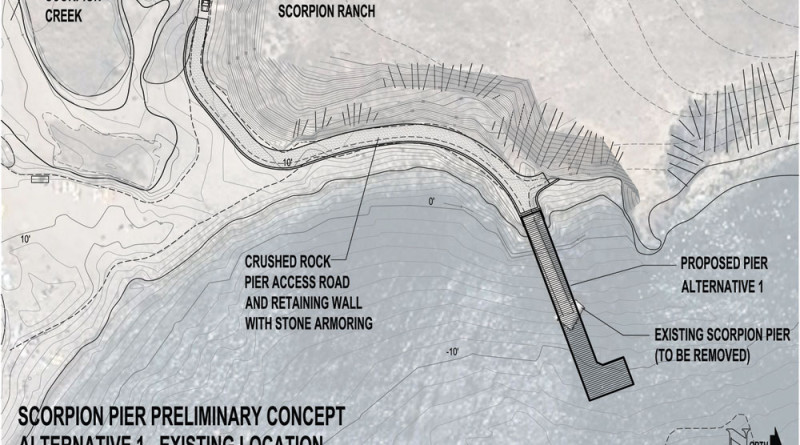 CHANNEL ISLANDS — Channel Islands National Park Service (NPS) released its plan to replace the current pier at Scorpion Harbor on the north side of Santa Cruz Island on Oct. 6, at the same time issuing a call for public comment on the plan

The DEIS (Draft Environmental Impact Statement) is the first phase of the process to build a new permanent pier and an important one.

“Public input always plays a big role in the development of any project in the National Park. We encourage individuals, organizations and agencies to provide input,” said Yvonne Menard, NPS public information officer. “We assess and directly consider all of the comments before finalizing a plan to proceed.”

The existing temporary pier is a flatbed railcar installed in 2000 and is reaching the end of its lifespan.

“It is rapidly deteriorating due to wave action and saltwater. It has been closed numerous times due to weather hazards, wave damage, and to perform required repair and maintenance activities,” Menard said.

During severe low tides, the pier is not useable for some ferryboat traffic or NPS vessels due to the lack of water depth. She also stated that the new pier would improve access year round for recreational boaters.

The new permanent pier needs to accommodate all visitors as well as park staff year round as well as protect sensitive natural and historically significant resources, according to NPS.

There are two alternatives up for public comment, which include building a new permanent pier either in the current location or about 150 feet to the south in the landing cove.

“If the pier is replaced in the present location, hardening of the shoreline will be necessary to protect pier access and shoreline erosion,” Menard said.

Alternately, if the new pier were to be constructed on the south side of the landing cove, it would require a shorter access road and only a small amount of hardening or armoring of the shoreline to keep it safe year round. In either location, the pier will need to be longer and taller than the existing pier to facilitate safer vessel docking in deeper water.

Once all the comments are in and assessed the next step is the formal government contracting process.

“When it is time to go out for a proposal, there is a public announcement about the project and interested parties then assess the work and can put in a bid proposal,” Menard said.

The pier draws an estimated 55,000 visitors per year.

The notice for the DEIS has been published in the Federal Register and public comment period will be open through Dec.18.