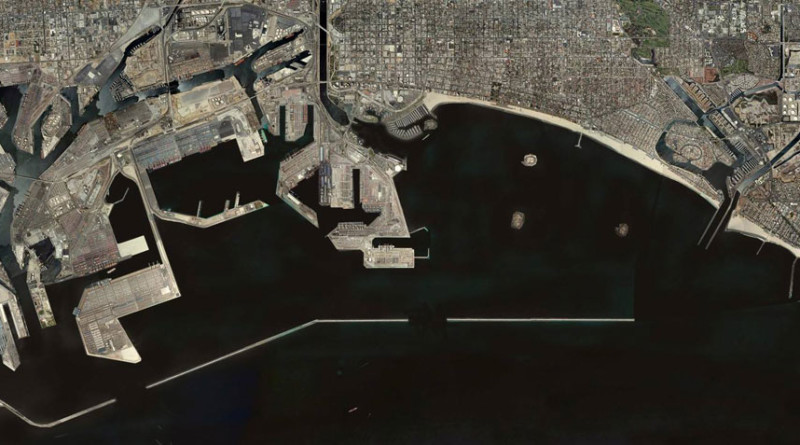 The Long Beach Breakwater (far right) could become history (or at least a smaller version of itself) depending on how a three-year feasibility study plays out. The city of Long Beach and U.S. Army Corps of Engineers are jointly backing the study.
Port of Long Beach photo

LONG BEACH — City and federal officials continue to receive public input and make progress on a three-year feasibility study aiming to restore aquatic habitat off the Long Beach shore by altering or removing the nearby breakwater.

“With this study we have the opportunity to use advances in science and technology to identify an ecosystem restoration solution that can improve the overall health of the East San Pedro Bay, as well as protect our maritime partners at the Port of Long Beach,” Vice Mayor Suja Lowenthal said in a statement.

An official statement from Garcia’s office said the feasibility study has two goals: restoring habitat such as coastal wetlands, kelp, rocky reef and other marine life to support a diversity of local and migratory species; and, improving water circulation to sustain aquatic habitats.

A Federal Register notice by the Corps of Engineers added the feasibility study will also explore recreational opportunities but ecosystem restoration is the top priority.

The Army Corps of Engineers could pursue alternative actions such as creating an underwater rocky reef for kelp beds just beyond the navigational channels or sandy islands to support eelgrass.

There is a possibility no action is taken and the breakwaters remain in place.

Federal officials built three breakwaters off the Long Beach, Wilmington and San Pedro coasts between 1899 and 1949. Long Beach’s breakwater, the easternmost of the three structures, was built between 1940 and 1949.

Surfrider Foundation’s Long Beach chapter is campaigning to have the breakwater, which takes up about 4,500 feet of water space, removed to help the city revisit its history as a surfing destination.

The foundation’s staff explained on the webpage of its Long Beach chapter how the breakwater affects tidal flows and outlines the pros and cons of removing the coastal defense structure.

“Since the breakwater was created, Long Beach’s waterfront has deteriorated,” foundation staff stated. “The natural flow of the ocean current and waves had previously assisted in keeping the beaches and waters in Long Beach free from stagnating pollutants. With the breakwater, urban runoff or stormwater from the Los Angeles River gets trapped within the harbor.”

Reconfiguring the breakwater could bring environmental and economic benefits to Long Beach, according to Surfrider Foundation staff, including a healthier ecosystem, improved water quality, higher property values and tourism activity.

Adverse effects include beach erosion, particularly along the narrow stretch of land separating Alamitos Bay from the Pacific Ocean.

Shoreline Marina would probably be the most impacted should the Long Beach Breakwater be diminished in size or removed since only open water exists between the recreational boating venue and the coastal defense structure.

Rainbow Harbor and Alamitos Bay Marina both have landmasses protecting boaters from open water, although altering the breakwater would still impact how currents flow in and out of both venues.

Catalina Express’s navigational route from Rainbow Harbor to Avalon’s Cabrillo Mole currently passes in between the middle and east breakwaters.

“The next opportunity for public comment will be a follow-up participatory workshop to elicit viewpoints on various habitat restoration measures, including breakwater modifications, with key stakeholder groups including residents, ports, marine biologists and surfers,” city staff stated. “The public’s input will provide valuable insights into the development of potential study solutions. The date, time, and location of this meeting will be made available soon.”

The Corps of Engineers’ public comment period ends May 7, according to a Federal Register notice. Written comments can be submitted to Naeem Siddiqui at Naemm.A.Siddiqui@usace.army.mil by or before May 7. Visit 1.usa.gov/1VRwXMn to view the entire notice.

Any action taken would only affect the Long Beach Breakwater; the San Pedro and Middle breakwaters are not included in the feasibility study.

A 2005 memorandum addressed to the Long Beach City Council stated residents have debated how a proposed breakwater reconfiguration would affect the Port of Long Beach, the local environment, and area residences or businesses for years.

“Are there reasonable solutions to complications that may arise from reconfiguring the breakwater to bring natural tidal action back to Long Beach,” the memorandum asked of the city’s elected officials.

The memorandum also pointed out the Long Beach Breakwater is federal property.