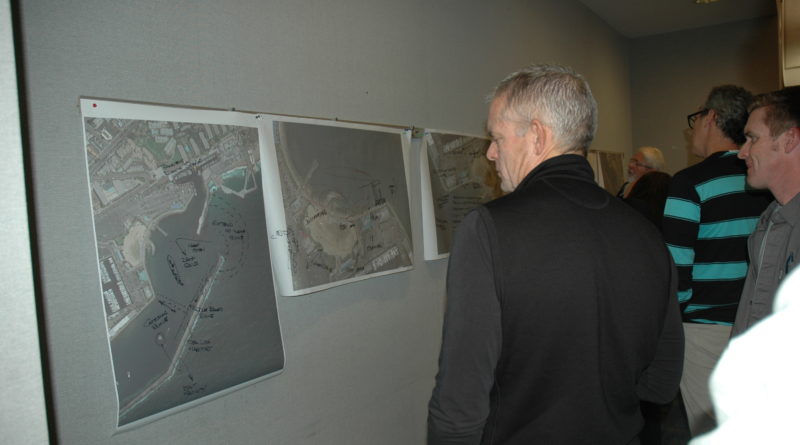 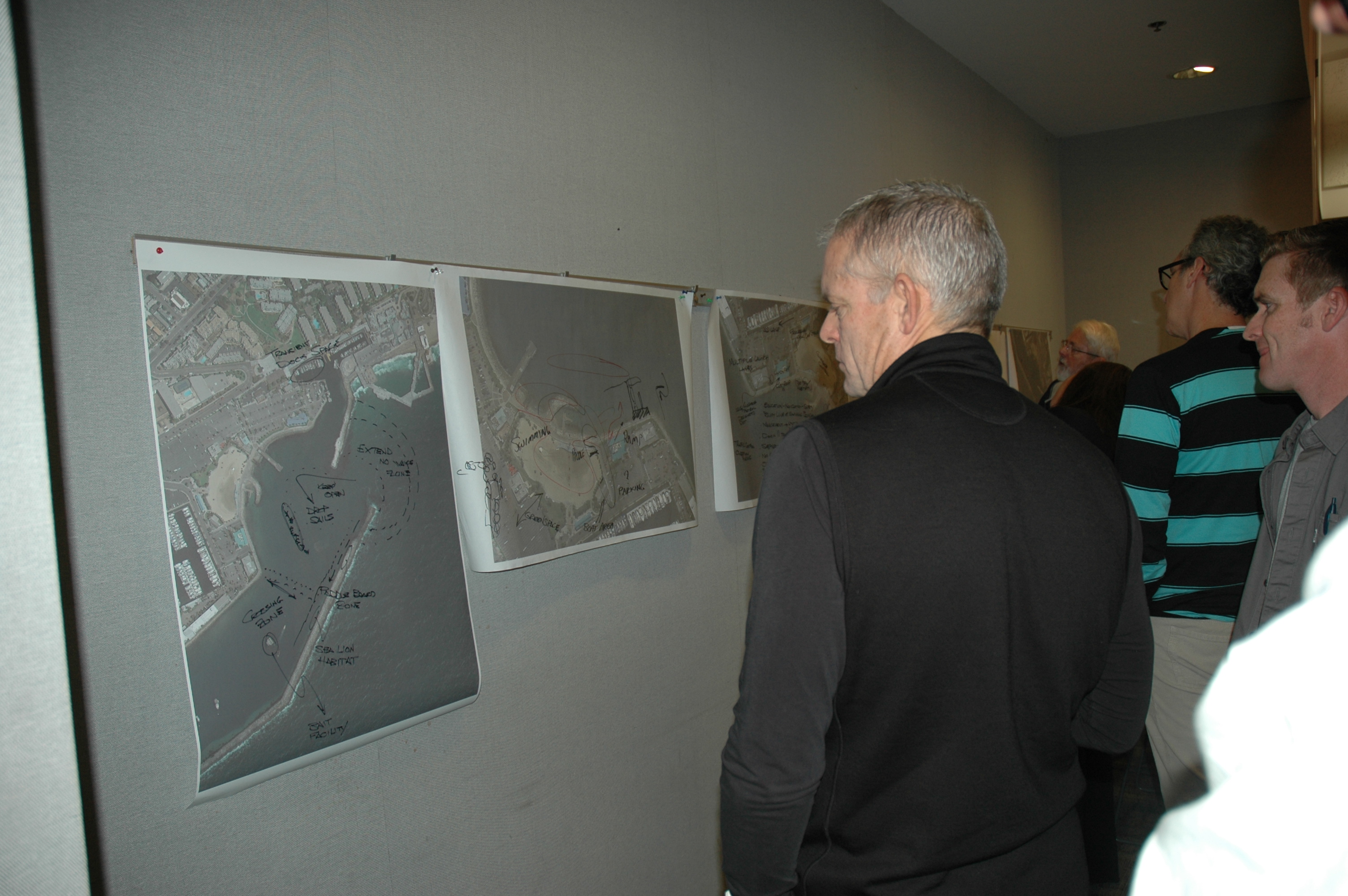 Held in the Redondo Beach Main Library, the open house was a time for stakeholders and interested groups to meet with civil engineers to discuss their thoughts on the project.

While portions of the plan, such as the removal of the harbor’s existing boat hoists and the relocation of the dinghy dock remains unchanged, there is still much to be considered.

The hoist and dinghy dock will either accompany the launch tamp to Mole D or by Polly’s at the Pier.

The first alternative consists of a detached breakwater that would allow paddle boarders to pass one way and power boaters another.

“It probably wouldn’t work from an engineering perspective,” Sherwood explained, “but staying true to the input we’ve received, we decided it was important to offer this idea back to the public.”

The second alternative considered features the adaptive reuse of the rock material around the harbor to create an L shaped breakwater to protect the launch ramp.

“With this one we won’t have to import new material,” Sherwood said, “but the downside is combined use — boaters and paddlers enter and exit through the same channel.”

Both alternatives will require the launch ramp to sink into the landside a little bit, which eats up 10 parking spaces. The maximum amount of parking spaces that could fit on the 1.4 acre parcel is 40. For these alternatives, only one dock would run down the middle of the ramp, which would also have two 15 foot wide boat launch lanes, Sherwood noted.

The third proposed alternative was preferred by the majority of the attendees. This design reversed the small hook breakwater at seaside lagoon and added a second breakwater to protect the launch ramp.

“That one was preferred because the two breakwaters separated the usages between the motorized boats and sailboats from the stand up paddlers/kayakers and swimmers,” Sherwood said.

The last two alternatives, are very similar in that they leave the hook jetty at seaside lagoon while adding an L jetty to protect the launch ramp.

“You have to separate the users groups with buoys and people weren’t too keen on that,” Sherwood said. “They liked having a physical rock jetty between the two usages.”

Open house guests were divided into three groups, power boaters, sailors and paddlers, discussed their concerns, thoughts and recommendations to Moffat & Nichol representative. Seated at three separate tables with all five alternatives laid out before them, to the groups discussed their user specific needs and issues. Opinions were then addressed by a representative of each table to the rest of the attendees.

“Our main focus was the hand launch area and how we’re going to get people out of the way [of boaters],” said Bryce Carnehl, a kayak angler and resident of Redondo Beach. “We recommend having a hand launch on the side of seaside lagoon. The issue is cross traffic and maintaining a direct flow of traffic with plenty of good signage to keep areas separated.”

Several power boaters were concerned with the violent side effects of potential storm surge.

“I’ve launched skiffs from the small craft launch and in a big swell it’s dangerous,” said Frank Nielsen, a power boater who frequents the Redondo area. “I launch from just about everywhere in California and [Redondo’s launch ramp] is probably going to be the closest to the open ocean that I know of any marina.”

While power boaters also argued over the idea of minimal to maximum parking, many attendees, like Nielsen, agreed that more parking meant more opportunity for a day on the water and is worth the longer wait caused by a larger amount of users.             The orientation and size of the breakwater, which will cost half of the entire launch ramp budget, is very important for the function of the ramp so it’s not impacted too much by waves, Sherwood said.

While a breakwater would be necessary, sailors agreed that the rock walls can be a nuisance to their use. “If you look at the prevailing wind coming in, you can see how easy it ends up blowing you into the rocks,” said Kent Iverson, a Redondo Beach resident and sailor. “Going out  can be a pain when you’re trying to get around the hook (breakwall); as a single person sailor, there’s no viable solution.”

There would also be a desire for the ability to rig dinghies and other small vessels to the beach, Iverson said.

“People talked about the use of the beach area; there’s not a lot of space for swimming and recreational use as it is, so there’s the possibility it could be used to expand the launch ramp circulation,” said Clark Stevens, the public input meeting intermediary.
Moffat & Nichol will use boater’s feedback to create a report summarizing what the public would prefer and present two or three of the alternative designs to Redondo Beach Harbor Commissioners on March 10 and the Redondo Beach City Council on March 18, Sherwood said.

Following these meetings, the company will then apply for an engineering analysis grant by April 1. If everything moves as scheduled Moffat and Nichol will then apply for a building grant on April 1, 2015. Permits with the California Coastal Commission, U.S. Army Corps of Engineers, Los Angeles Regional Water Quality Control Board, California State Lands Commission, California Department of Fish and Game, the US Coast Guard and other organizations will need to be in place before the launch ramp will be opened to the public at the estimated date of Memorial Day, 2016.