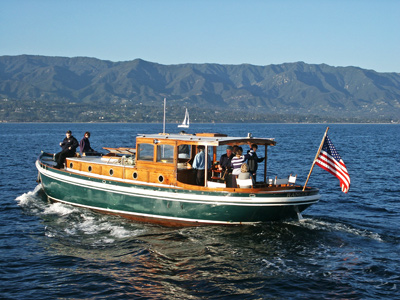 Ranger is a genuine, classic big-game fishing yacht, the first private fishing yacht built on the west coast and the flagship of the Santa Barbara Maritime Museum. Built in 1917 by Fellows and Stewart in Wilmington, she was made to the specifications of Jimmy Jump, a founding member of the Catalina Island Tuna Club.

For many years, Ranger served as the flagship of the Tuna Club. Twenty-six trophy-winning fish were caught from Ranger; and two of its records still stand: the largest yellow fin tuna and the largest broad bill swordfish. Over the years, celebrities such as Humphrey Bogart, Zane Grey, John Wayne, and Errol Flynn fished from Ranger, and the vessel has been used for photoshoots by Lands End and Kevin Costner.

Donated by Jack Morehart, she became the Maritime Museum’s first exhibit. Ranger is 41 feet overall and has a full galley, dining table, and berthing for four. The comfortable cockpit featured two swivel fighting chairs with rod sockets. One of these chairs now sits in the Maritime Museum’s Ranger Exhibit, while the other is part of the Museum’s interactive Sport Fishing Exhibit. The wood mast and boom accommodate a stabilizing sail, and she still has the original anchor winch and her 1917 kerosene running lights.