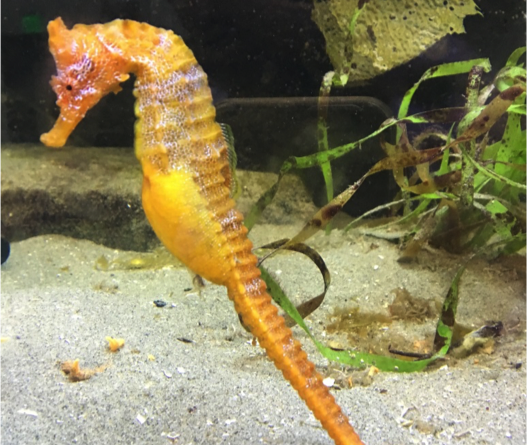 NEWPORT BEACH — On May 7, the California Department of Fish and Wildlife discovered a rare Pacific Seahorse during a monthly survey near an eelgrass restoration site in Upper Newport Bay. Orange County Coastkeeper says the finding is a sign that eelgrass restoration efforts are working and providing homes for both native and visiting species.

“During one of our Marine Life Inventory programs, Fish and Wildlife staff collected a Pacific Seahorse in the Upper Newport Bay Ecological Reserve. The last time this species was found in the reserve occurred sometime between 1999 and 2000,” said California Department of Fish & Wildlife Education Program Coordinator Robin Madrid. “It measured about 6 inches in height, and they can grow up to 12 inches.”

This is only the tenth reported sighting of this species north of Baja since the 1800s, as its typical range is from Baja, California to Peru and the Galapagos. In 2012, the Pacific Seahorse became classified as vulnerable by the International Union for Conservation of Nature, with its population steadily decreasing since the early 2000s, dropping by 50 percent between 2007 and 2012. The Pacific Seahorse relies exclusively on seagrass beds and coral reefs for its habitat, thus declines in seagrass habitat contribute to the demise of the seahorse, as does capture for traditional medicine and capture for pet trade.

“It’s thrilling to see the seahorse, a species that really needs our help, find its way to our bay and seek refuge in our eelgrass beds,” said Marine Restoration Director Sara Briley. “Though its presence may only be temporary, finding the seahorse in our restored eelgrass bed is very encouraging and showcases the success of our program in returning valuable habitat back to Newport Bay.”