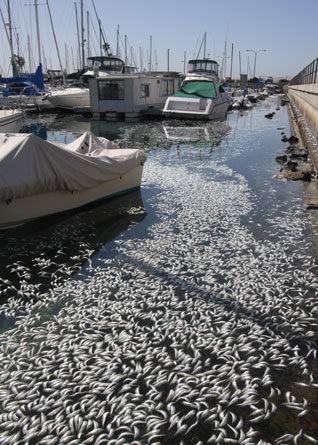 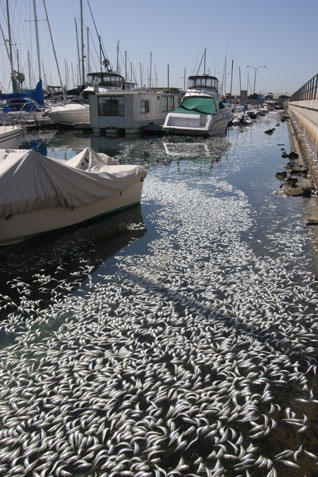 Nearly 175 tons of dead sardines had been removed from the harbor, and the city wanted to make good use of them. Fortunately, the city’s trash hauler, Athens Services, has one of the state’s only organic composting facilities.

“We were looking for options to transport and haul the fish from the harbor, and our options were to take them out to sea, store them in a landfill or recycle them,” said Redondo Beach Public Works director Mike Witzansky. “We pursued the recycling option, because Athens’ composting facility was cost-effective, and we thought it was a good reuse of the material.”

Over the next six months, American Organics — an Athens-owned company located in Victorville — treated the fish that met their demise in the harbor, turning them into a high-grade compost blend mixed with food waste, yard waste and dirt.

After passing all of the appropriate health and safety requirements, Athens Services hauled 30 tons of the total 1,100 tons of fish-mixed compost to Redondo Beach’s Wilderness Park Sept. 17, where it was distributed free to the public.

“We thought it was a nice example of a complete 360-degree life cycle event,” Witzansky said. “We’re happy that the fish that unfortunately died in the harbor were used in some positive way.”

The compost giveaway event ran from 8 a.m. to noon, and more than 250 cars showed up to take a few shovelfuls of the compost home to fertilize their lawns and gardens.

While the event ran smoothly, a few eyebrows were raised by those wondering if it was safe to create compost out of fish that had been rotting in the harbor, known to contain traces of domoic acid in their stomachs.

But University of Southern California marine biologist David Caron said that multiple tests were run throughout the fish’s decomposition cycle, revealing no traces of domoic acid by the time the fish were mixed in with the compost.

Caron, who was in charge of the university’s federally funded program at King Harbor that included water-testing sensors placed throughout the marina, had been waiting since 2006 for a fish kill to hit the harbor so he could study the causes and effects surrounding the incident.

“We actually just had our federal grant come to a close, and the fish kill happened right before our funds ran out,” Caron said.

While the massive emergency cleanup operation was under way, Caron and his team were perfectly set up to survey what had happened to the fish — and what had caused their deaths.

At a Sept. 29 lecture at Cabrillo Marine Aquarium, Caron said that while the cause of death of the 175 tons of sardines is known, the reason they entered the harbor in such a massive quantity may never be revealed.

“The bottom line that we’ve been repeating since the beginning is that the fish died because they used up all of the oxygen in the water, causing asphyxiation, and died,” Caron said. “What we don’t know for sure is why so many fish backed themselves into the harbor’s north end.”

The night the fish entered the harbor, Caron said there was a big wind event the day before — and a massive upwelling of deep, low-oxygen water from offshore may have pushed the fish into the harbor.

Caron said anecdotal accounts from anglers and boaters around the harbor noted that large schools of mackerel and bonito were seen outside the harbor entrance, which could have chased the sardines back into the harbor’s slow-circulating corner.

Complicating matters further, Caron noted that the sardines in the harbor tested positive for elevated levels of domoic acid, which fish ingest while swimming through algal blooms that occur offshore.

During the time of the fish kill, a massive algal bloom was reported between Catalina Island and San Pedro. The domoic acid can cripple an animal’s navigation abilities, which could explain why the fish were unable to find their way out of the harbor.

“There are a number of things that may have played into why the fish — once they got back into that northern basin — did not come out,” Caron said. “But, be that as it may, the simple fact is that they did not come out, and they asphyxiated themselves by putting a huge demand on the oxygen in the water.”