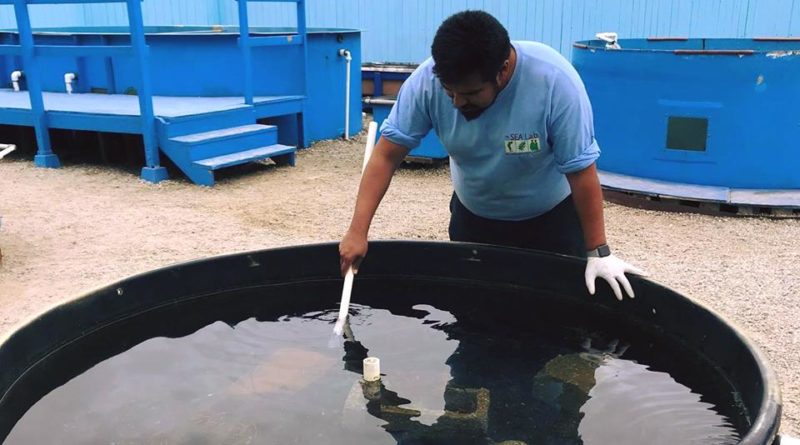 Staff at the SEA Lab cleans a lobster tank, which are among the many marine creatures housed here. There are also touch tanks and other educational opportunities. (The SEA Lab Facebook photo)

The nonprofit organization, in need of raising $36,000 and operating from a verbal month-to-month lease, met with harbor commissioners to devise ways to survive hard times.

REDONDO BEACH—It is hard to conceive of a local environmental nonprofit organization in Southern California struggling to survive, yet SEA Lab of Redondo Beach is currently between a rock and a hard place. Annually, the SEA Lab program, which is connected with L.A. Conservation Corps, serves more than 12,000 students, but between funding and the possibility of losing their lease, its future looks uncertain.

SEA Lab, which largely serves to educate students about California’s rich coastal environment, currently provides homes for more than 1,000 fish and marine species. Due to issues raising funds, SEA Lab has been forced to lay off one full-time staff member, reduce a part-time staff member’s hours, have halved their L.A. Conservation Corps members from 12 to six, and can no longer remain open during the week. Additionally, SEA Lab raised the cost of students on field trips from $5 to $7. SEA Lab, according to a Redondo Beach Harbor Commission staff report, is losing between $5,000 and $6,000 a month and needs to raise approximately $36,000 for the first six months of the year.

On March 1, the Redondo Beach Harbor Commission received a dire report from SEA Lab representative, Marina Madrigal, about the state of the organization. The staff report reads, “Their main challenge is that they have no lease with the new owner [AES], only a verbal month-to-month agreement. SEA Lab is also experiencing a financial deficit and they are lacking in interested partners since they don’t have a secure lease (hence a secure future).”

SEA Lab launched when Southern California Edison contributed $5 million from a court settlement involving San Onofre Nuclear Generating Station.  AES purchased the building across the street from the Redondo Beach power plant in 1998 and allowed SEA Lab to continue operating. In June 2018, the building was sold to a private developer Leo Pustilnikov. At this time, the new landlord has not committed to a long-term contract; the power plant is also set to be shut down by 2020.

In recent reports by The Daily Breeze, it was revealed development plans for area currently are to convert nearly 6 acres into wetlands, a plan determined by the California Coastal Commission four years ago. Costs to restore the wetlands are estimated at $5 million.

SEA Lab has long invested as a resource for Redondo Beach, the youth, and coastal critters that they serve. Visit lacorps.org/programs/the-sea-lab for more information about their programs and to make a donation.