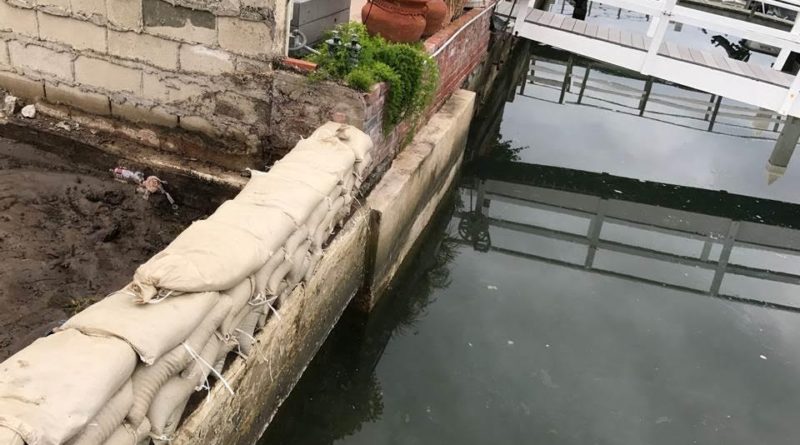 Could this be a common occurrence as waterfront properties are being redeveloped?

NEWPORT BEACH ― As various news outlets have reported, certain Balboa Peninsula residents experienced flooding on the night of May 24. The overflow of water was caused by a contractor removing a planter which was acting as a seawall.

The property is located along a channel in the Finley Tract of Newport Beach.

“All the seawalls are privately owned in this channel using various materials, which were permitted at some point,” George Murdoch, Newport Beach’s municipal operations director, stated.

An incident like this has not happened before, but what is preventing it from happening again?

“Our Building Department is working with this homeowner currently and we will be reaching out to other private seawall owners in the coming months about what happened and how we/they can avoid it,” was Murdoch’s email response to The Log.

The planter/seawall was removed by a hired contractor the prior week before the flooding occurred, Murdoch said.

“A private contractor performed demolition work at a private residence last week and removed a brick planter. It appears that brick planter was acting as a sea wall to hold back the tides,” Newport Beach Public Information Officer Mary Locey also confirmed.

Why was there no overflow of water until the following week?

“The tides had not been high enough to cause topping until [May 24],” Murdoch answered.

As the tide rose that night, saltwater seeped into homes and garages even causing an electrical fire. A couple homes had two inches of water inside.

Cooper and Company, a private real estate investment firm, owns the property which was flattened by a demolition contractor. The contractor, Tight Quarters, removed the planter which ended up being the seawall.

“The current status is that a new temporary seawall is being constructed. Our Community Development Department is working with them about a permanent solution before our next King Tides near the end of June,” Murdoch informed The Log on May 26.

Residents in the area were accessing the damage and contacting insurance companies at the time of this report.

No boats or docks were affected from this incident.