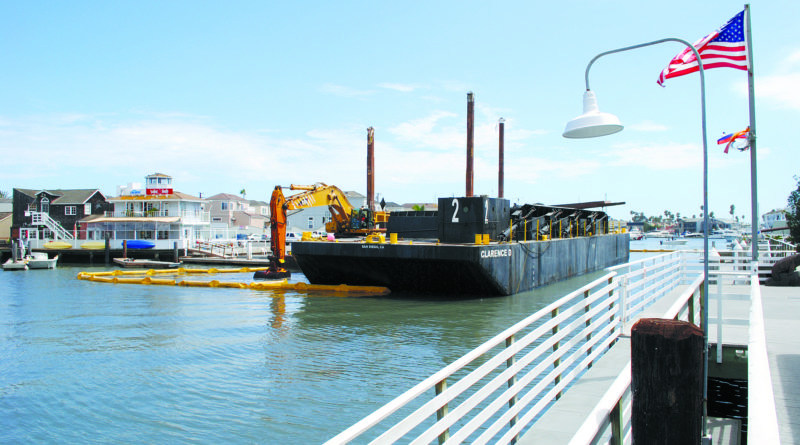 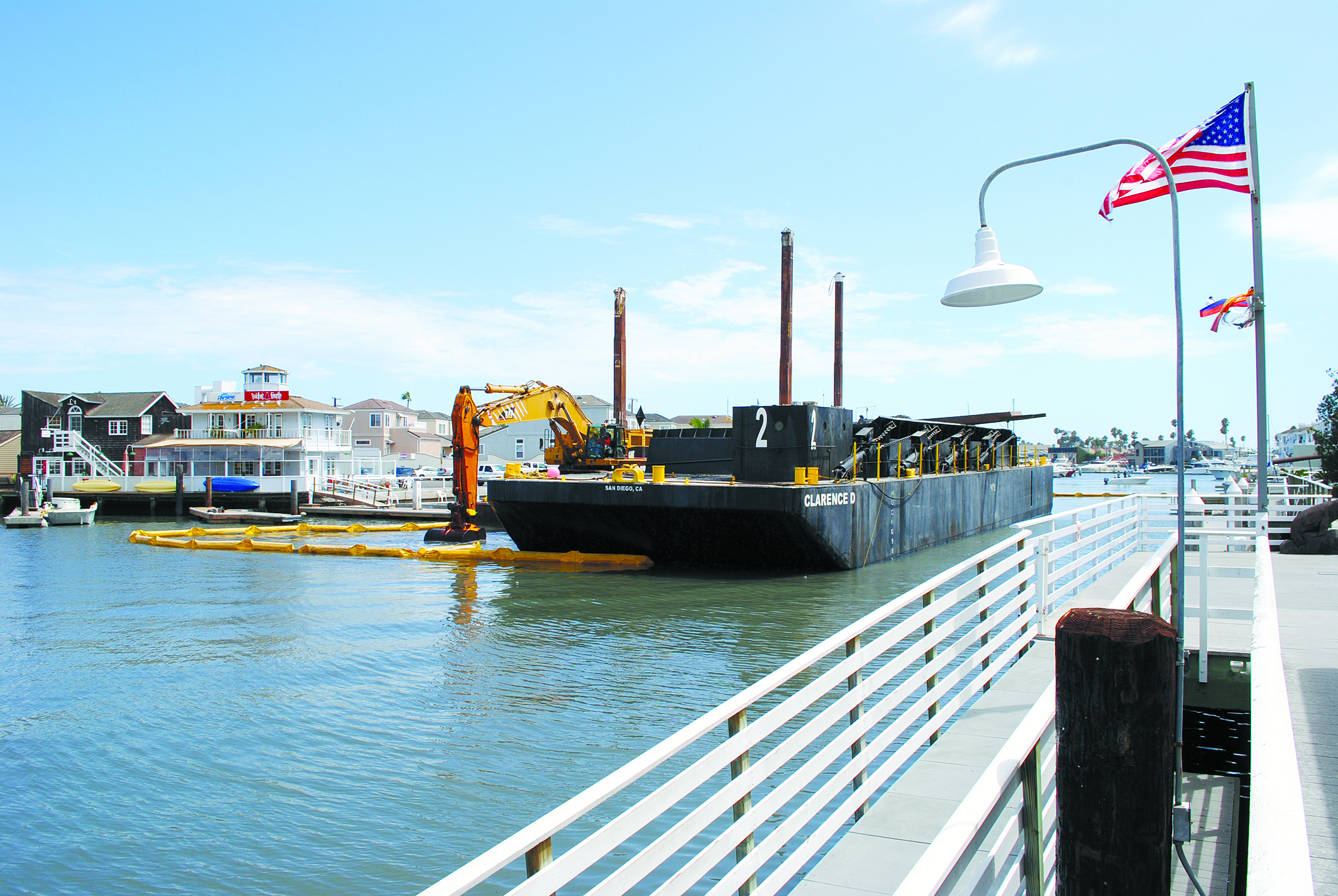 NEWPORT BEACH — Since Aug. 1, Dutra Dredging Co. has been digging away in Newport Harbor’s Rhine Channel, removing thousands of cubic yards of contaminated sediment from the bay floor, cleaning up decades’ worth of bay pollution while deepening the channel for navigation at the same time.

Initial estimates set the project completion date for Dec. 31, but the two-pronged undertaking of dredging and dock pile replacement in the channel has been moving at a steady pace — ahead of schedule. That has led Anchor QEA principal scientist Steve Cappellino to set a new timeline for the project’s completion date: Thanksgiving.

“Dutra’s been very effective at getting the contaminated sediment removed the first time around, so we haven’t had to go back and dig deeper at too many areas,” said Cappellino, whose Anchor QEA team is overseeing the project for the city. “We also assumed that Dutra would do all of the dredging first, and then come back and do the pilings afterward. But, in reality, they brought out two complete crews and have been working simultaneously — which is a lot more efficient.”

Due to the narrowness of portions of the Rhine Channel, it was expected that only one barge would be capable of maneuvering in and out of the channel at any given time. However, the Dutra team worked with a dredging barge, a dump scow and a pile-driving barge all operating at the same time, while still leaving a narrow channel open for smaller boats to navigate the channel.

The teamwork meant that while the pile-driving aspect was being completed, the dredging barge could dig in the wider portion of the channel’s southern end.

“They worked together, didn’t get in anybody’s — or each other’s — way and worked like that for about five weeks; and that really saved some time,” said Newport Beach Harbor Resources manager Chris Miller.

With nearly 95 percent of the dredging in the channel completed, the remainder of the project will be focused on dredging in front of American Legion Yacht Club. The pile-driving portion of the project was completed Oct. 12, as the old piles were removed along the edges of the Rhine Channel docks and replaced with new, longer piles to accommodate the deeper channel depths. An area of contaminated sediment in front of the proposed Marina Park project — between 19th and 16th streets — was also removed during the dredging project.

“The dredging of Marina Park is like ‘Phase 1’ of that project in my mind, and a big milestone,” Miller said at the Oct. 12 Newport Beach Harbor Commission meeting. “We have taken advantage of the dredging equipment already in place in the harbor — and now we won’t have to deal with it next year, when we’ll hopefully start on construction for the project.”

Miller said the final dredging component of the project at American Legion Yacht Club will be challenging, because Dutra will be pulling 26 piles out of the marina, and then floating all the marina’s docks to an area in front of the Marina Park property. This will allow the dredging barge and scow to gain access to the inside of American Legion Yacht Club’s marina without damaging the docks. When dredging is completed, the marina docks will be floated back to their original location and 26 new piles will be driven in place.

Miller has been sending out weekly updates to boaters, dock owners and businesses displaced or affected by the Rhine Channel dredging project — alerting everyone about what boats need to be moved and when they can return to their slips, and when the channel will be closed to boat traffic. He has also been alerting restaurants and boatyards when the work will be coming to their areas.

One trouble area for the dredging project was the turning basin in the north end of the channel, where the crew had to chase contaminated sediment down to a 19-foot average depth: about 5 feet deeper than the channel’s 14-foot average.

“Areas where boats are turning around usually churn the mud up over time,” Cappellino said. Other areas that required extra dredging included locations in front of shipyards and dry-stack boat storage areas.

“That’s where a lot of the metals and contaminants come from, so those areas were expected to require a little extra dredging,” Cappellino added.

Miller added that the extra dredging needed to remove the sediment from trouble spots has resulted in a few thousand cubic yards of additional sediment that are not suitable for ocean disposal, which must be barged up to the Port of Long Beach’s Middle Harbor Project. There, more than 2.7 million cubic yards of sediment will be used to fill in 54 acres of water between two shipping terminals.

“We only needed to go a few feet more in a few areas, and then we’re hitting clean sand,” Miller said. “The project’s goal is to chase the contaminants down, and we are digging to clean.”

The project has given Newport Harbor the chance to get rid of sediment that cannot be dumped at offshore disposal sites such as LA-3, at a much cheaper rate than trucking the sediment to an inland site for proper disposal.