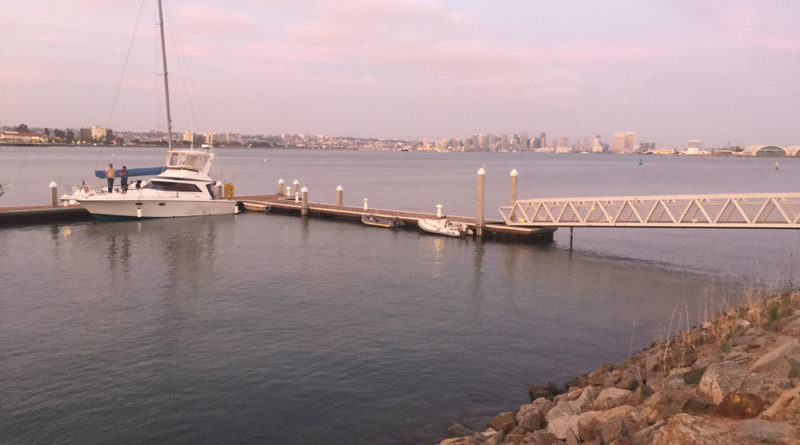 SAN DIEGO — Water is seemingly everywhere in and around San Diego’s urban core, most of which is accessible by boat. The boating community certainly maintains a strong presence in San Diego Bay, with marinas and moored boats visible from just about anywhere you can see the water.

Although boaters certainly love being on the water or aboard their vessel, there is plenty to enjoy on land in San Diego.

The Log’s reporter spent four days in Downtown San Diego and South County, visiting several local venues and restaurants. Local and visiting boaters can dock-and-dine at one of about a dozen restaurants, rent a room in a world class hotel, take in a baseball game at Petco Park, enjoy the nightlife at Gaslamp Quarter, relive one of the Navy’s most famous battles aboard the USS Midway, learn San Diego’s history at Point Loma or buy a freshly caught bluefin at the Tuna Harbor Dockside Market.

Dining options are aplenty in San Diego, especially on and near the waterfront. Some restaurants, such as Bali Hai, offer a dock-and-dine service, allowing boaters to disembark from their vessel and patronize a local eatery.

Bali Hai on Shelter Island is one of San Diego’s iconic restaurants and sits right on the water. Diners have a perfect view of San Diego’s downtown skyline and the harbor’s navigational traffic. The food is good, too, with the Polynesian-themed restaurant offering dishes such as Salmon Panini, Coconut Shrimp, Braised Swordfish, Pan Seared Free Range Chicken and Moroccan Style Lamb.

Hungry boaters can simply dock their vessel at the 90-linear-foot slip adjacent to the restaurant’s outdoor banquet facility and walk upstairs to the main dining hall.

Fathom Bistro Bait and Tackle on Shelter Island Pier is an eatery perfect for recreational anglers and boaters at Kona Kai or Shelter Island marinas. The unassuming eatery that looks as if it belongs on Oahu’s North Shore, is San Diego’s only restaurant offering craft beer on the water.

A handful of hotels along the San Diego waterfront are easily accessible to boaters, such as the Bay Club Hotel and Marina on Shelter Island and Hilton and Sheraton properties adjacent to boat docks at Harbor Island.

San Diego’s newest waterfront hotel, the Hilton Bayfront, is perfectly situated next to the 5th Avenue Pier. There is enough space here for large yachts to dock and then walk to several downtown locations, including the 30-story Hilton Bayfront or San Diego’s Convention Center.

The Hilton Bayfront is one of three major hotel chains in this portion of downtown’s waterfront adjacent to a marina. Boaters or yacht owners seeking to stay in a hotel instead of aboard their vessel might consider checking into the Hilton Bayfront for its panoramic views, easy access to the waterfront and relaxed environment.

Boaters who also love baseball can take a five minute walk across a pedestrian bridge to Petco Park, where the San Diego Padres play 81 days out of the year.

Just above the Convention Center is the Marriott Marquis, which owns a 446-slip marina. Plans are in place to expand the hotel, with a “grand terrace” to be built adjacent to the marina and a promenade along the waterfront connecting boaters, hotel guests and others to destinations such as Seaport Village, The Headquarters and USS Midway.

Construction is already underway, so boaters visiting this hotel should prepare accordingly. Stay tuned to The Log for updates on the Marriott’s renovations.

San Diego was once home to a thriving tuna industry in the 1960s. The city has transformed significantly since then and San Diego is no longer a tuna hub. However, the Port of San Diego established a new Tuna Harbor Dockside Market in hopes of revitalizing the city’s commercial past.

If you want to enjoy a fresh catch for lunch or dinner without dropping a line, San Diego’s Tuna Harbor Dockside Market is a great place to pick up a bluefin, red snapper or yellowtail caught by local anglers.

The open-air seafood market is located next to Seaport Village and walking distance from nearby marinas and piers. Visiting the market on a Saturday morning means the fishing dock will be brimming with locals lining up to buy fish caught overnight and brought to shore aboard a commercial vessel just after sunrise.

There is much to see and do south of San Diego and north of the Mexican border. Boaters can discover life in this region by docking at Pier 32 Marina in National City or Chula Vista Marina a few miles south.

In between Pier 32 and Chula Vista marinas is The Living Coast Discovery Center, a marine sanctuary showcasing local marine life. The sanctuary is an ideal destination for families who dock in National City or Chula Vista to spend some quality time on land and learning about the local wildlife.

There are certainly more activities for boaters to enjoy in San Diego, such as Balboa Park, Mission Bay or Hotel Del Coronado. Both the city and region is boater-friendly and those visiting the San Diego by sea will certainly find a way to be entertained.