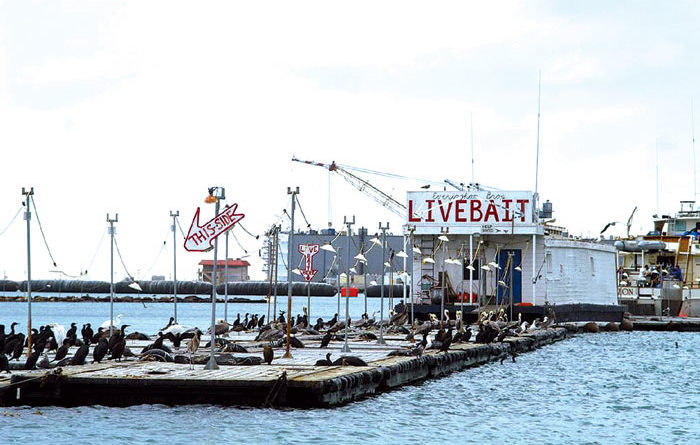 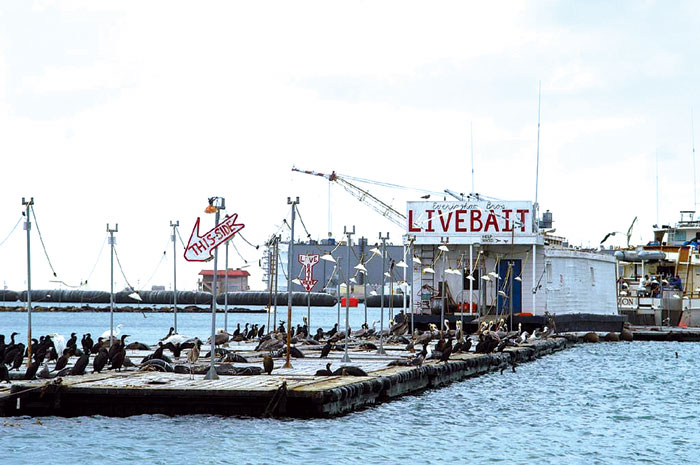 SAN DIEGO — As the Navy prepares to replace its aging fuel pier at Naval Base Point Loma, San Diego Bay’s longstanding bait barge will have to move out of harm’s way. However, finding a temporary location that all harbor users can agree on has been a complicated matter, so far.

“There’s a lot of conditions — like water current, temperature and depth — that need to be present for our bait boxes to function,” said Buck Everingham, owner of the Everingham Bros. Bait Barge.

The Everingham family has been running the bait barge in San Diego Bay since 1948. Located in Navy waters just south of the fuel pier, the company’s current setup includes two 500-foot-long barges full of sardines and anchovies, waiting to be loaded onto commercial and recreational fishing vessels before they head out of the harbor.

But before the bait barge existed, the Navy developed a fuel pier at its Point Loma base known as Pier 180, which has components dating back to its original construction in 1908. The T-shaped pier accommodates around 43 Navy vessels a month for refueling.

Because of its lack of functionality and its deteriorating condition, the Navy has planned a total demolition and replacement of the pier — bringing it up to modern standards, dredging a deeper channel for larger ships and creating a safe, modern fuel pier for incoming Navy vessels.

However, to meet the California State Lands Commission’s marine oil terminal standards and to make the pier earthquake-safe, the reinforced concrete pilings of the nearly 100-year-old pier must be replaced with 36-inch- and 48-inch-diameter all-steel piles.
While pile driving and pile replacement is a normal occurrence in harbors, all-steel piles of this size have never been driven in San Diego. With the use of heavy machinery, the all-steel pile driving creates extreme underwater noise and vibration, which can injure or kill nearby marine life.

The damage was first seen when similar-size all-steel piles were used by the Army Corps of Engineers in the Bay Bridge rebuilding project in San Francisco. It was reported that fish were found floating in the vicinity of the pile driving with broken bladders because of the underwater vibrations.

With the bait barge so close to the pier, the Navy has determined that the bait — and the accompanying sea lions that visit the barge — would be in harm’s way and must be relocated while pile driving takes place. The “zone of influence” deemed unsafe for marine life during pile driving extends across the bay’s entrance channel, past Shelter Island and nearly to the eastern tip of Harbor Island.

Everingham said the Navy contacted him about the impending project and had already worked with a marine biologist to find potential locations in the bay that met the multiple requirements to sustain the bait.

“The Navy came to us first, and they were very helpful in letting us know what was going on,” Everingham said.

After looking at seven locations, three were found to be feasible, with two of the alternatives located off Harbor Island’s east end (Alternative 4, and Alternative 4a), and the other site located in front of the Maritime Museum of San Diego, off North Harbor Drive (Alternative 6).

With the three locations identified, Everingham has requested to be moved to Alternative 4a, off Harbor Island’s east end and just outside of the marked zone of influence.

“For us, the best position is going to be option 4a, because of the water flow and the depth,” Everingham said. “Anything close over by the maritime museum would have an eddy effect, and we would be getting recirculated with hot water — and the bait probably wouldn’t live very well.”

But Everingham’s hoped-for spot would be right on top of the start and finish line of Cortez Racing Association’s weekly summer beer can sailboat races.

The nonprofit organization, which includes around 240 members — most of whom are members of local yacht clubs — has more than 100 participants in the weekly race series, and it is concerned about what the barge moving to that location will mean for the races.

“We’d have to move our start line west toward Tom’s Lighthouse (at Harbor Island’s west end), and the boats would then be sailing through and around the barges,” said Cortez Racing Association vice commodore Lee Pearce. “We’re concerned because there’s tour traffic there. People take boat tours to see the sea lions, and there are the fishing vessels coming and going, as well.”

Pearce noted that the club would rather see the barges moved toward the maritime museum, away from the race starting line and out of view of Harbor Island’s restaurants and hotels.

“For us, that would be least obtrusive,” Pearce said. “I think it would be the most out of the way, as far as traffic and as far as aesthetics, off Harbor Island.”

But no matter which location is selected, Everingham has a challenge in front of him, as does the commercial and recreational fishing industry in San Diego Bay. For vessels heading out of the harbor, the move, regardless of location, will mean an increase in mileage and time — both of which are prized commodities.

“We feel it’s important for the Navy to do this, because we understand how important the Navy is to our county and our economy,” Everingham said. “I mean, this is going to hurt us no matter where we are put. We’re going to have less favorable bait conditions than where we’re at, but at least it’s only temporary.”

While the fuel pier project is expected to be approved in October, pile driving would not begin until 2014, giving all parties time to work on a compromise on the barge’s future relocation.

“Obviously, Everingham is making a big sacrifice by having to move the barges, and the fishing boats will now be heading away from their normal fishing grounds to get bait,” Pearce said. “It’s going to affect everyone a little bit, but hopefully not one group too much.”

The construction plan outlined by the Navy would call for a three-year phased-in approach, keeping the current fuel pier operational while the new double-deck pier is constructed alongside it.

Because of environmental concerns, pile driving would only be allowed between Sept. 15 and April 1 of each year — outside of the Least Tern breeding season. According to Everingham, the Navy informed him that the bait barge would need to be relocated in October 2014 for five months, in October 2015 for three months and possibly in October 2016 for two months, if more pile driving activity is needed.