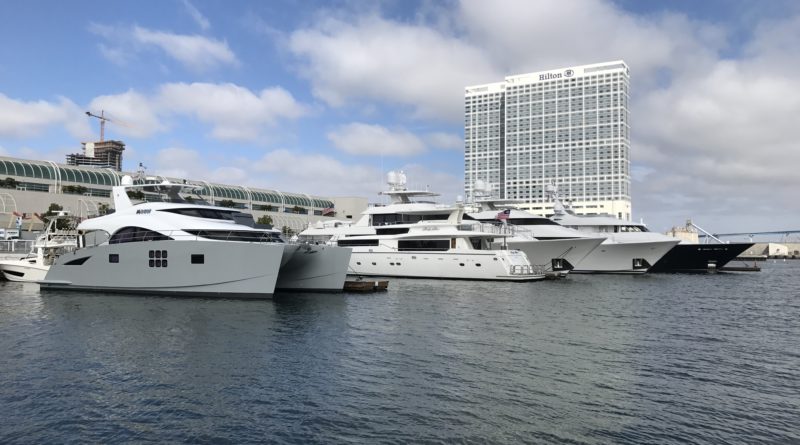 SAN DIEGO — Sure as America’s Finest City is known for its sunshine is the reveler who takes a moment to pulls out his or her cell phone and snaps a few photos of the exotic vessels docked at San Diego’s Fifth Avenue Landing.

The boutique marina just in front of San Diego’s Convention Center started as a pilot program in 2008, as Southern California’s second city began its push to be a destination for megayachts and superyachts. Fifth Avenue Landing, more than one decade later, has 12 slips for yachts up to 300 feet in size – an upgrade from the marina’s “humble” beginnings as a berthing home for 100- and 200-foot yachts.

A walk along San Diego’s downtown embarcadero just below the Marriott Marquis and alongside the Convention Center will reveal no shortage of those who are either ogling at the berthed megayachts/superyachts or snapping a selfie in front of a 200-plus-foot vessel.

These revelers, for the most part, aren’t let down, as Fifth Street Landing – one of the most unique marinas in a city known for recreational boating – generally has its fair share of ultra large yachts berthed within one of its slips. Those who do dock at the 12-slip boutique marina receive complimentary concierge for captain and crew, individual pumpout service and shore power, among other berthing amenities.

San Diego clearly didn’t start the superyacht marinas – such venues already exist in European countries such as France, Italy, Monaco and Spain. Port Hercule in Monaco garners significant attention due to its proximity to the Monaco Grand Prix.

Port Tarraco (Spain, 64 slips) and Marina di Portofino (Italy, 14 slips) are, due to their respective small sizes, known for being exclusive. Marinas such as Port de Saint Tropez (France, 700-plus berths) and Yas Marina (United Arab Emirates, 227 berths) are also major draws for those who own yachts of 100 feet or larger.

The Port of San Diego, nonetheless, hopes Fifth Avenue Landing – which was pushed by a group of people who started the San Diego Superyacht Association in 2006 – would be among the elite venues for megayacht/superyacht owners. Port district officials hoped the boutique marina would be a draw for large yachts navigating up and down the Pacific Ocean – with those actually docking also bringing added aesthetic value the San Diego Bay waterfront.

Berthing at Fifth Street Landing is not for the faint of heart, as the fee to dock here generally runs about $225 per day for 300-foot yachts. Loading and unloading of equipment or provisions is extra.

Those who are able to make reservations can do so by calling 619-522-6159 or visiting fifthavenuelanding.com.