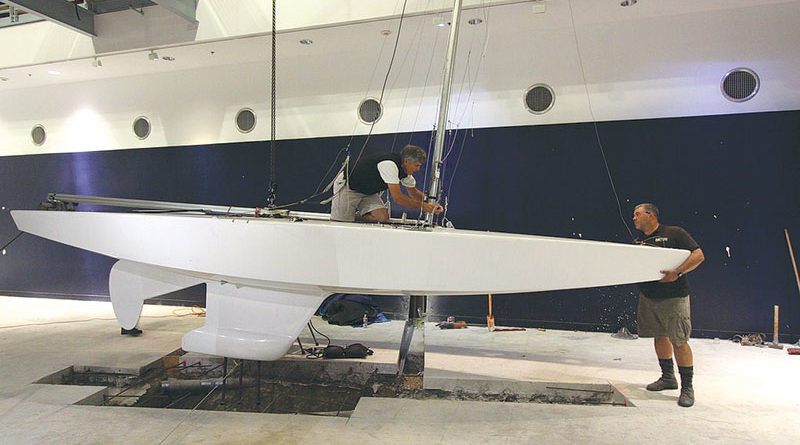 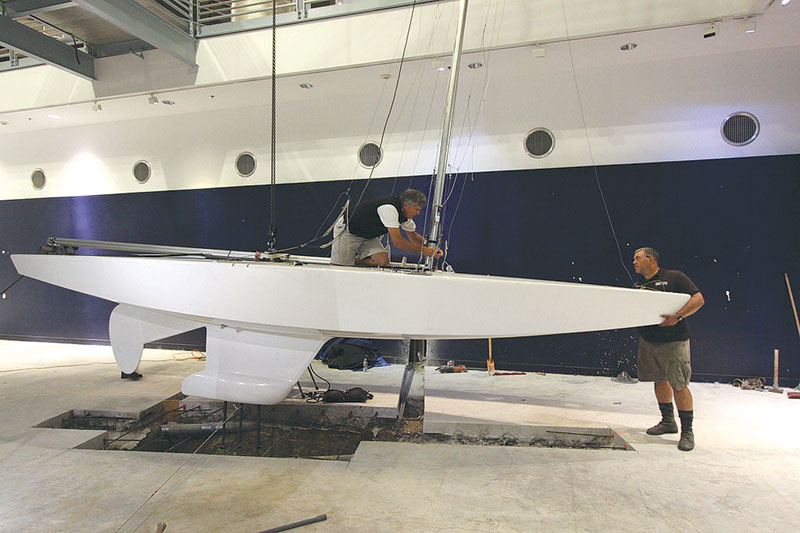 The exhibit is scheduled to open by Summer 2012, but the first step in the project was getting a fully rigged Star class racing boat into the room and cemented into the floor. San Diego sailing legends such as Lowell North, Malin Burnham, Mark Reynolds and Dennis Conner have raced in Star boats, resulting in world championships and Olympic medals. The Star is one of the oldest Olympic class boats.

“I was there making sure that the building stood in place while they brought the whole boat in there,” said project manager Drew Moser. “The riggers were in there lifting it off of the trailer and attached it to the top floor walkway in our building as they lowered it in. Luckily, this place is still standing, the boat’s upright and I still have my job.”

The Star boat will anchor the exhibit, set up as the entrance piece for visitors to see as they come into the exhibit area. With sailing’s prominent role in San Diego, it was only fitting that the Hall of Champions dedicated a major exhibit to the sport of sailing, Moser said, to take its place alongside the Chargers and Padres showrooms.

“This is a chance to really showcase the sport of sailing and, hopefully, grow its participation base,” Moser said.             Plans for the hall include an America’s Cup room with scale models of the boats that raced when San Diego hosted Cup racing in 1988, 1992 and 1995. An array of interactive sailing simulators, a grinder endurance machine and other hands-on exhibits will be included — and educational and historical displays on San Diego’s famous sailors, sailing clubs, naval architects and significant races will be developed.

The San Diego Hall of Champions is the largest multisport museum in the world, with 70,000 square feet of showroom space. It features three levels of sports memorabilia and the Breitbard Hall of Fame, showcasing famous San Diego athletes.

For more information, or to donate to the sailing exhibit, visit sdhoc.org or mail a check to the Hall of Champions, Attn. Sailing Exhibit, 2131 Pan American Plaza, San Diego, CA 92101.