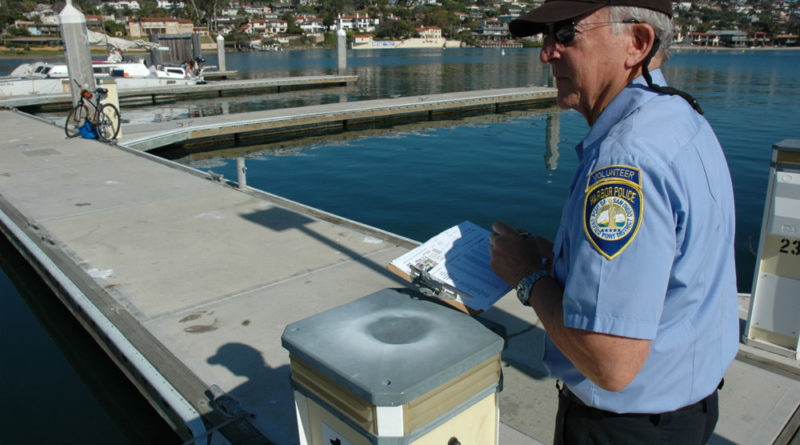 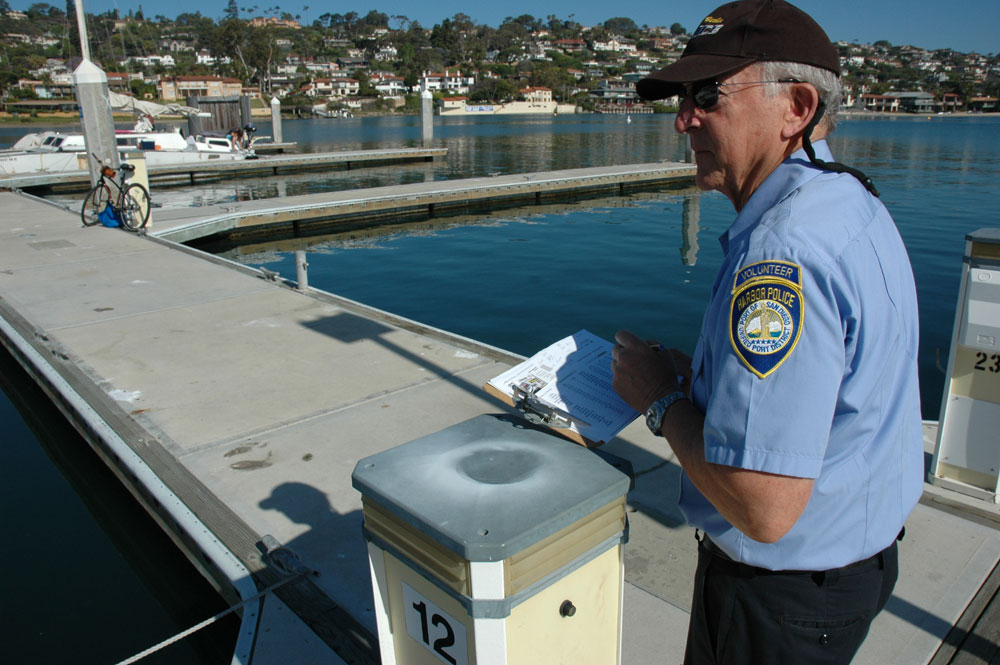 SAN DIEGO—Patrolling the third largest bay in the state of California can be a demanding and daunting task.

So anytime the department’s assistant chief, Lt. Mark Stainbrook, can implement another set of eyes and ears while on patrol, he’s all for it.

“You don’t know what you don’t know,” Stainbrook said. “Sometimes people see things that they think are odd but they don’t know to report them to the police or call the appropriate authority. The police want to educate the community as to what a threat is, what we’re looking for and how to report it.”

To assist in the process, the department launched the iWatch My Bay program in May, a collaborative effort led by the Reserve Senior Volunteer Patrol Program (RSVP) with help from various enforcement agencies and Harbor Police.

“These guys have been out hot and heavy meeting with the marinas,” Stainbrook said. “They have gotten a lot of good feedback. We’ve started seeing them put posters up in the windows of the marinas and handing out pamphlets. So far it’s been very good with a lot of positive feedback.”

Armed with a stack of educational brochures and posters, members of the RSVP are arriving at marinas and bay businesses, as part of their daily responsibilities, outlining the program’s objectives. The institution of the program promotes a safety and awareness for members of the marine community to keep a watchful eye on their surroundings.

“When I go to the marinas right now it’s dealing with the people in charge, the marina managers, the marketing people, the people that run the office,” said Gary Adler, a member of the RSVP. “They’re the ones that have the bulletin boards and they meet the people when they come in asking for information.”

Adler said the RSVP is creating initial contacts with the goal of following up and ensuring the boating community has a firm grasp of the program.

“This program is not only going to survive with our introduction to it, but with revisits,” Adler said. “The revisits are when we’re on patrol down the road and we stop in with marina managers and say ‘how’s the brochures, what’s going on, can we answer any questions?’ We’ll walk the docks and talk to individual boaters.”

The objective is to work in conjunction with members of the community to mitigate smuggling instances, keep a watchful eye on overloaded vessels, inadequate or incorrect fishing gear, arbitrary vessels meandering aimlessly throughout the bay and individuals loitering at boat ramps or access points.

“Some people call it a neighborhood watch on steroids, but it’s better than that,” Sgt. Todd Rakos said. “The force multiplier is the community that works out on the water. They know the area well and know what is unusual and what isn’t unusual.

“If we could just get all those people to report suspicious activity, to make those initial connections—whether it’s a homeland security aspect or a human smuggling aspect, which we deal with a lot in the San Diego area,” Rakos added. “It’s just about connecting those dots and making the area safer for everybody.”

Rakos said initial outreach has included establishing contacts with not only marinas, but fuel docks, dive shops and boat maintenance yards, among others.

Those frequenting the bay have been asked to keep an eye out for any form of suspicious activity by remaining vigilant and reporting any abnormal behaviors or activities—especially those which may be linked to crime and terrorism.

Officers seek to remind the community to trust their instincts while being observant, remembering that behavior is what defines suspicion—not race, ethnicity, religious background or national origin. Warning signs or indicators of possible terrorism-related events may include hostile surveillance (video or photography), unusual activities such as a stranger asking questions about security checkpoints and police patrols, individuals purchasing supplies to create weapons or explosive material and coming into contact with unusual chemicals.

Similar programs have been established in New York within its mass transit systems. San Diego’s edition, though, is focused on issues of terrorism and crime, including potential panga boat smuggling.

Stainbrook said the department will hold quarterly community outreach meetings in the coming months to discuss what suspicious activity and behavior looks like and how to report it, as well as when to call 911 and when to email authorities.

To report any suspicious activity in the bay area, contact the San Diego Harbor Police Department at (619) 686-6272 or email sdhpiwatch@portofsandiego.org.