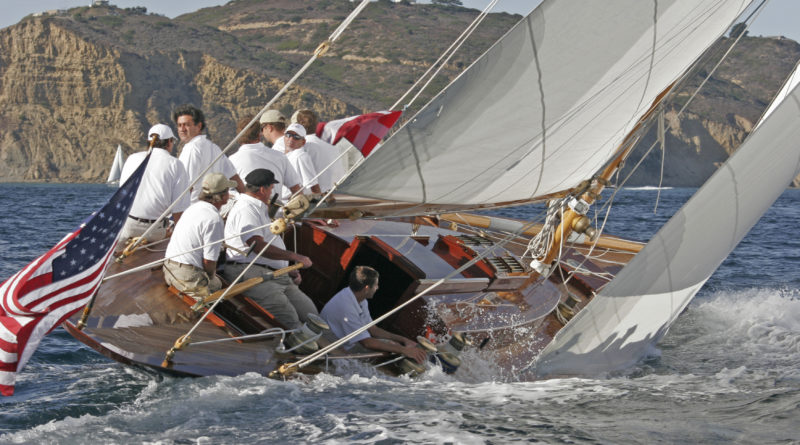 SAN DIEGO — A special photography exhibition – Wind & Water: Sailing in San Diego – will open at Maritime Museum of San Diego on March 4. At the center of the exhibit is the photography of Bobby Grieser, a San Diego resident for many years and passionate sailor, and Mark Albertazzi, who was a close friend of Grieser and a talented photographer in his own right. The photographs displayed at this exhibit will put viewers into the shoes of the sailors who have had a lifelong zest for adventure and feel at home on the sea.

This impressive and inspiring collection of photographs from such events as America’s Cup to vessels considered historic being sailed recreationally capture the moments sailors live for with the wind blowing through their hair as they compete in renowned sailing events, including a rare collection of historic, classic and wooden yachts racing in San Diego.

President and CEO of the Maritime Museum of San Diego, Dr. Raymond Ashley, PhD, K.C.I., describes the exhibit in a press release as “a passionate example for both sailing and photography fostered by a deep friendship with two of the industry’s most renowned nautical photographers.”

Grieser was an international yachting and nautical sport photographer who was very well known in yachting circles, especially in San Diego. Born in Washington D.C., Grieser developed his love for all-things nautical on the waters of Chesapeake Bay. He was a photojournalist for Associated Press, Indianapolis Star, Washington Star and the San Diego Edition of Los Angeles Times. Though sailing was his first love, his assignments took him all over the world from covering riots to war zones in Somalia, the Ronald Reagan White House years, and iconic personalities such as Andy Warhol.

To say Grieser was a character himself is also fair – he was often quoted as saying “I’m off to make a picture,” when speaking about his assignments and had a friendly, jolly appearance and with a certain exuberance for life.

The year 1990 saw him publish “Chesapeake Bay,” an art and coffee table book featuring his black and white photography, which then resulted in an exhibition called Capturing the Spirit of the Chesapeake Bay.

About one year ago, Grieser passed away at 70. His obituary by the Los Angeles Times also attests to his fun-loving character: “He barked at seven Presidents, the Queen and the Pope. That was Bob Grieser, world-renowned photographer.”

The obituary stated in acknowledgment he barked like a German shepherd to gain the attention of his subjects.

Buried at sea, Grieser’s ashes were scattered in San Diego and his beloved Chesapeake Bay; he is survived by his wife and the body of photos he has taken on his adventures.

Along with Grieser’s photos, there are also photos by his close friend Mark Albertazzi, who currently lives in San Diego. Albertazzi had family roots on Molokai, a Hawaiian island that is perhaps one of the sparsest with few people, but a world of exploration for nature lovers. An avid fan of on-water activities, Albertazzi has been taking photos of ocean scenes since his parents bought him his first 35-millimeter camera at the age of 13. A sailor aboard his 1930 John Alden schooner, Dauntless, Albertazzi has been able to gain access to some of the most spectacular regattas, yachts and remote anchorages along California’s coast.

Those who gaze upon Albertazzi’s photos will notice how many of the shots are very active and have an almost painterly quality as he sites he was heavily influenced by maritime painters like Edward Hopper and James Edward Buttersworth.

Albertazzi has been an advertising agency principal and creative director for over 30 years, using his design experience in creating captivating photography. In addition to his photography, Albertazzi has crafted advertising campaigns for international brands like Callaway Golf, Reebok, Sony and BMW, collaborating with some of the industry’s best commercial photographers and directors.

A sailor for a good portion of his life, Albertazzi’s keen knowledge of boating has lead him to capture amazing photographs of not just yachts but crew workers, active boating shots and natural elements.

This exhibit will be held inside Star of India, the world’s oldest active sailing ship, in the Hold Gallery and will be included with general admission. Visitors can purchase tickets online at sdmaritime.org, call 619-234-9153 ext.101 or visit the Maritime Museum of San Diego Ticket Booth and Gift Shop located on the North Embarcadero in downtown San Diego.