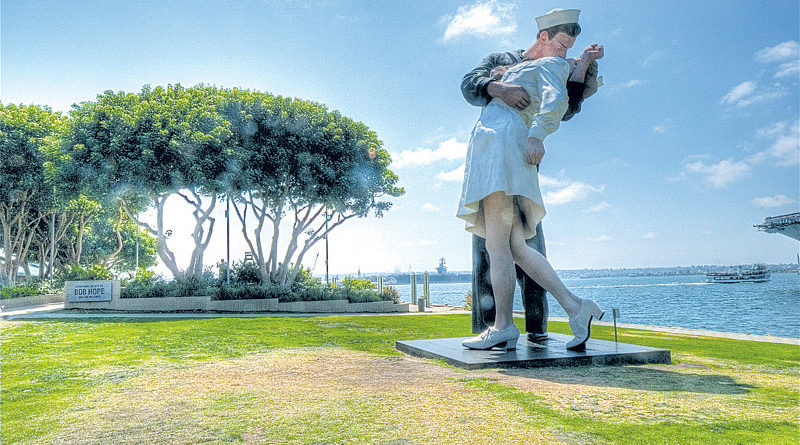 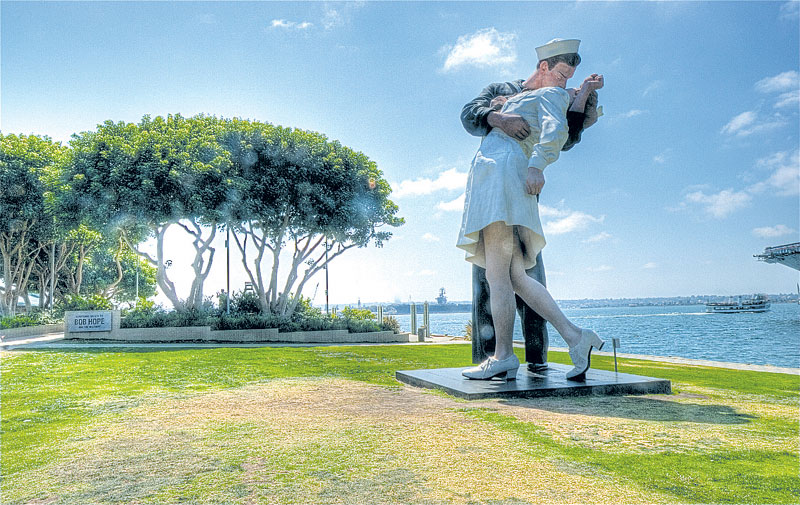 SAN DIEGO — Since 2007, a 25-foot foam statue dubbed “Unconditional Surrender” has been prominently displayed at San Diego’s Tuna Harbor, and it could be set to stay for much longer.

The sculpture, designed after Alfred Eisenstaedt’s iconic photograph of a sailor and a nurse embracing in Times Square on V-J Day at the end of World War II, has drawn both praise and criticism over the years. Now, what was planned as a temporary art display in the harbor has been approved by the San Diego Board of Port Commissioners for permanent display.

At their March 6 meeting, commissioners voted to accept a local group’s offer to donate a painted bronze version of the statue to the Port of San Diego, as long as the necessary funds are raised over the next 12 months.

“I can understand looking at this and people saying, ‘this is not art,’” said chairman Lou Smith. “But I look at it, and there’s always people there. There’s something magical about this statue.”

The permanent statue creation and installation is expected to cost nearly $990,000. Mac McLaughlin, president of USS Midway Museum, told commissioners that the museum is prepared to launch a fundraising effort to get the funds for the sculpture.

The bronze version will be more durable than the Seward Johnson-created foam-urethane sculpture that has been in Tuna Harbor Park since 2007. The sculpture was supposed to remain at its location for one year, but multiple extensions have allowed the giant kissing couple to stay.

However, members of San Diego’s Public Arts Committee believe the sailor and nurse have overstayed their welcome. The committee voted 6-4 against the proposal of a permanent piece to replace the temporary one, stating that “the artwork did not meet the port’s vision of critically acclaimed artwork, and that the artwork did not demonstrate excellence in aesthetic quality, workmanship, innovation or creativity.”

“You are now presented with a proposal that will be a defining feature of San Diego’s waterfront, essentially forever,” said Public Arts Committee member Michael Krichman at the March 6 commission meeting. “That is a far cry from the approval of a one-year loan of a cartoonish attraction.”

Despite the Public Arts Committee’s disapproval of the sculpture, the Board of Port Commissioners approved the project. That rankled members of the committee, who questioned the proper procedure for determining public art on San Diego’s waterfront.

“I realize it’s frustrating for a committee to spend all of that time, and then have the commission come back and override that decision,” said commissioner Robert Valderrama, who voted in favor of the permanent sculpture. “We may see it from a different perspective, but that’s what we have to do as commissioners, and make that call.”

The on-loan edition of “Unconditional Surrender” is scheduled to be removed in May. The sculpture will be returned to its owner, the Santa Monica-based Sculpture Foundation, which will restore it and send it to another city.