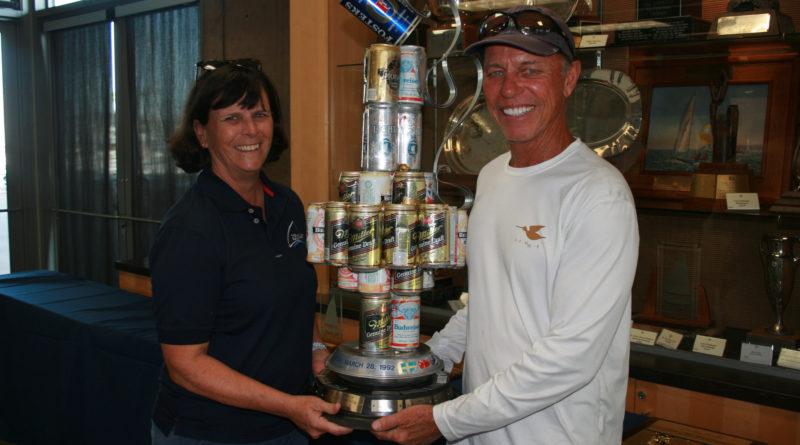 Unconventional sabot-racing competition, started by an all-ladies sailing fleet, awards a beer-can version of the “Auld Cup” as its grand prize.

SAN DIEGO — Upon hearing the title of the annual San Diego Yacht Club regatta, Men’s Mayhem, many visuals may come to mind – one such might be the scene from “Planet of the Apes” where Charlton Heston utters the infamous line, “It’s a mad house!” from within his prison cell. While there is certainly some monkey business involved in this sailing event that brings out the comical side of sabot racing, this all-men’s regatta is as treasured as it is unique, as serious as it is quirky and holds historical value to those who have taken part for nearly 50 years.

The history that goes along with Men’s Mayhem is compelling, a challenge by the San Diego YC women’s sabot racing fleet of yesteryear. The penultimate prize: a trophy constructed from beer cans, possibly in the likeness of the renowned America’s Cup “Auld Mug,” is what all sailors are vying for when it comes to this on-water challenge.

Men’s Mayhem began in the 1970s when a group of all-lady, San Diego YC sabot sailors, known as Sexy Sabot Sailing Set (SSSS), wanted to challenge the men of the club that sabot racing wasn’t as easy as it appeared. SSSS, which began in the early ‘60s and is still active and headed by Fleet Captain Meredith Blair, continues to host Men’s Mayhem every year, usually a day before Easter.

Blair recalls, “In the 1970s, Men’s Mayhem was born, and it continues to be one of the highlights of the San Diego YC sailing year. The women’s sabot group, SSSS, initiated the event to show their husbands the difficulty of sabot sailing and racing. It often led to new sails, repairs or new boats as the boat’s condition was often used to explain a husband’s poor showing.”

Regatta Chair Dee Van Horne has been putting on the event for at least five years and spoke with The Log about the event and some of her favorite highlights from years past.

“For me, I think my favorite memories are just watching the guys’ competitive nature while sailing the sabot. Remember, this is a ‘kids’ boat – 8 feet long and not very wide. These guys fold themselves up in these little boats and sail their hearts out, reaching for that puff of wind that gives them the edge over their competitors,” Van Horne said.

Van Horne added squirt guns and goofy costumes, among other small touches, are sometimes thrown into the event each year to make it fun. Like any other regatta, there are classes, one such being the Clydesdale (which is for men 200 pounds and heavier to sail sabot).

And, yes – the men are weighed beforehand to ensure they qualify.

Among some of the participants who have joined in the fun over the years are top sailors from the San Diego area like Dan North, Chuck Sinks, Randy Lake, Don Bedford and others.

“Men’s Mayhem … [draws] some of the best young adult sailors who grew up racing sabots,” Blair continued. “Competition is fierce, along with a healthy dose of fun and frivolity.”

When asking Van Horne if this event is just lighthearted fun, she replies, “Oh no, it is serious. I can tell you that much,” referring to the competitive nature of the men as they attempt to race their little sabots.

Fleet members and family have fun creating the one-of-a-kind trophies, which are presented to the overall winners.

“Trophies were all funny and timely, the most prestigious of which is the “Auld Mug,” which was constructed when Dennis Connor brought America’s Cup to San Diego,” Blair said. “Mary Jane Caldwell and her son-in-law made the America’s Cup replica out of beer cans and it was awarded to the overall winner of Mayhem – today it’s still the top prize.”
Another unusual aspect of Men’s Mayhem is the entry fee: It’s two six-packs of beer or, for participants who are not of drinking age, two six-packs of soda or another favorite beverage.            While sailing is a sincere, at times no-nonsense sport, this event brings out the entertaining quality with action-packed amusement – of course, at the expense of some of the men who perform poorly or mock the sabot-racing class.

At one time the regatta was open to the public, but Van Horne notes that many of the participants who showed up were clad in high heels and hot pants, attire that was not too appropriate for sailing events. Now, the event is open to all men ages 18 and over who are members of San Diego YC or are members and affiliated with another yacht club. This year, it will be held March 31.