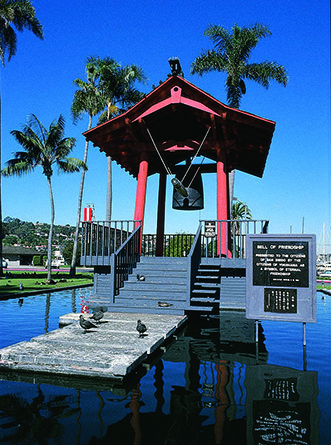 SAN DIEGO — America’s Finest City might also be one of the country’s friendliest, as San Diego is home to a pair of interesting pieces of public art commemorating the city’s relationship with members of the Pacific Rim.

The Yokohama Friendship Bell, located on the western cul-de-sac of Shelter Island, was presented to San Diego by the citizens of Yokohama in 1958. It stands 6 feet tall and weighs nearly 2.5 tons. The bell was made in Japan and delivered to San Diego aboard the U.S. Navy’s U.S.S. Prairie. A delegation was finally able to install and dedicate the bell in 1960.