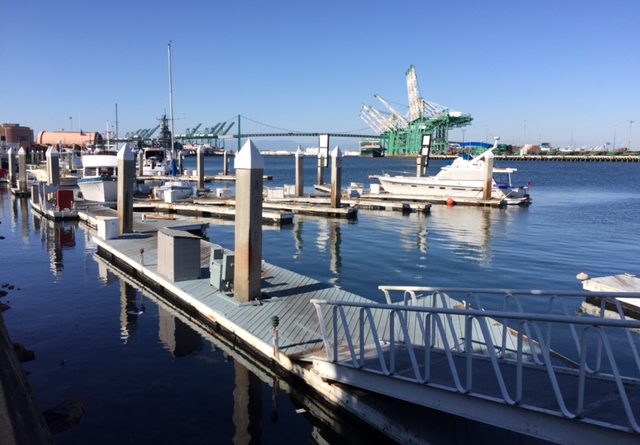 SAN PEDRO — San Pedro’s waterfront is beginning to weave a heartbreaking picture along the lines of Charles Dickens’ “A Tale of Two Cities.” As Ports O’ Call boaters, tenants and locals butt heads with the Port of Los Angeles (POLA), the picture is still unclear. Boaters at the Ports O’ Call marina faced a second wave of evictions, but will the current climate be revealed as an age of darkness as waterfront redevelopments loom?

The second wave of evictions occurred at the marina at Ports O’ Call on March 6 at 9 a.m. as the L.A. Waterfront continues its transformation into San Pedro Public Market. The redevelopment is more controversial than exciting, it appears at times. Tension between Ports O’ Call tenants and boaters and POLA has been heightening for some time, perhaps going back as far as 20 years when the idea of redeveloping the L.A. Waterfront was first imagined. The Log covered the first set of marina evictions back in 2016.

Boaters, during this second round of evictions, were given the option to relocate to Cabrillo Marina, an offer accepted by 14 boaters. In total, about 45 boats received notices by the Los Angeles Port Police on Nov. 30, 2017. The notices informed boaters their vessels must be removed from the marina by March 1. A second batch of notices was sent to boaters on Dec. 20, 2017. By March 1, only three vessels had remained in the marina; those vessels were removed by L.A. Port Police.

“The master tenant (Jayme Wilson dba Spirit Cruises) was notified on June 30, 2017 and again on Sept. 2, 2017. We do not know if he notified the boat owners since they were his tenants, not the Port’s,” Phillip Sanfield, director of media relations for POLA, told The Log.

A Flavor of the Controversy

James Allen, a local San Pedro publisher and member of the Central San Pedro Neighborhood Council, said he is familiar with “the plight of the boaters.”

Although the Port may have filed its proceedings legally, Allen said the agency’s actions, at the very least, have shaken tenants and created an atmosphere of mistrust.
“There is an underlying mistrust of the POLA by most of the tenants and this whole development has been terribly mishandled from a public relations perspective, no matter how grandiose the developer’s drawing looks,” Allen told The Log, who added that he has had conversations with tenants such as Jayme Wilson, the owner of Ports O’ Call Restaurant, Spirit Cruises and the marina that saw evictions earlier in the month.

“If you look at the public comments on both the Jan. 11 and Jan. 25 Harbor Commission meetings on the POLA website, you’ll get a flavor of the controversy,” Allen continued.

Allen also felt that the Port Police might have expected a showdown near the waterfront, but no conflict occurred during the eviction process.

POLA, however, is sticking to a single narrative.

“At every point in this process, the port has been fully transparent in our efforts and fully compliant with all laws and regulations with respect to this process,” Sanfield said. “We sympathize with business owners who have been displaced during this process. We understand it is difficult to transition to new opportunities. These circumstances should not have been a surprise to anyone. Tenants have been on a month-to-month lease since 2014 and the port signed an agreement with the new developer in 2016.”

Wilson could not be reached for commentary, yet an article published by The Daily Breeze on March 12 reveals details on his side of the story.

The article indicates Wilson might have been told by one of the developers, The Ratkovich Company, his operations could remain open through Dec. 31, 2018 and slips could continue being used through this time period as well. While Wilson might have been told one thing, POLA considered the costs of delayed construction too much and decided against allowing Wilson to keep businesses open during construction.

Sanfield stated he was not aware where boaters found moorings but said Wilson, who was the operator, might know.

“Some of these working boaters found safe harbor at Cabrillo Way Marina and at least one other went to Newmark’s in Wilmington,” Allen stated.

Tenants of Ports O’ Call claimed the selection process for the L.A. Waterfront developer was manipulated to choose developers who did not have the best interests of the locals and tenants in mind. Tenants also claimed an Environmental Impact Report (EIR) was illegally changed and all evicted tenants were discriminated against because of their race.

Sanfield, in an email to The Log, stated such claims, made by tenants at a March 12 news conference, “made a variety of unsubstantiated claims that have no merit.”

The port and developers will move forward with plans to build San Pedro Public Market in the midst of a heated lawsuit. Reports from the March 20 Town Hall meeting are sure to follow as for what those designs and plans will ultimately include.

Current renderings of the project envision a grandiose outdoor marketplace with the possibility of bringing back the Red Line Trolley of days past, carnival rides and new retail shops and eateries along with the possibility of a few old Ports O’ Call classics – if the legalities of these are ever straightened out. Notably, San Pedro Public Market is a complete departure from the old Ports O’ Call Village if one goes by the initial drawings.

In a correspondence to The Log, Jesse Marquez, executive director of Coalition For A Safe Environment and speaker on behalf of evicted tenants, shared a written statement explaining the major complaints 18 evicted tenants of Ports O’ Call Village have against POLA. Of some of the damages is the loss of more than 100 small-business jobs.

The statement continues: “The Port in May 2018 approved an Addendum to the 2009 Project Final EIR seven years later, which made major changes in the project phases, project design and to evict all existing Ports O’ Call tenants with no invitation to come back. Under the California Environmental Quality Act (CEQA) an addendum, which is attached to the Final EIR, can only include minor project changes and information.”

One of the tenants, Akibu Jimoh, the owner of African American Gifts, said in the press release: “I have been part of Ports O’ Call Village for [more than] 20 years and I cannot believe that this has happened in America. I feel so bad that I had to lay off all of my employees, they have nowhere to go. I demand that the State Attorney General step in and begin an investigation of the Port of Los Angeles and the qualifications of the selected developers.”

Marquez and the tenants further have documented “[more than] 5,000 pages of reference information and evidence” that they have released to the general public, and have forwarded their findings to agents such as U.S. Army Corps of Engineers, Attorney General and others.

Unfortunately, the L.A. Waterfront is not the first – and will not be the last – of these circumstances. In a balancing act, it is incredibly difficult to retain the character of a waterfront and its locals while bringing in a big business corporation. It might appear, to some, the developers or city officials don’t care.

The Log’s own Capt. Nicole discussed her own experience with watching her beloved Potomac waterfront become gentrified, while the publication’s Standing Watch column, penned by Parimal M. Rohit, has rolled out this topic on a number of occasions as well.

Many of the locals and residents of San Pedro certainly expressed their point of view at the Jan. 28 POLA Harbor Commission meeting. Though overwhelming support for the waterfront redevelopment has been expressed in some corners, one would believe otherwise after listening to the comments made at the meeting.

What remains to be seen is whether those criticizing the recent developments – mostly, tenant evictions – at POLA will have any influence over the future of L.A. Waterfront.