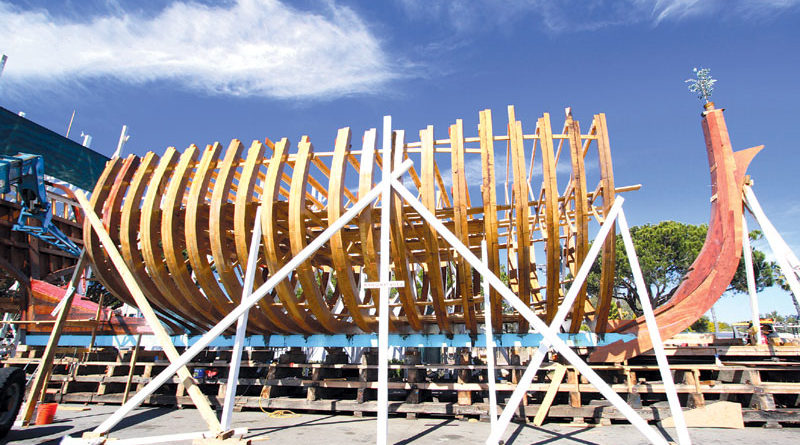 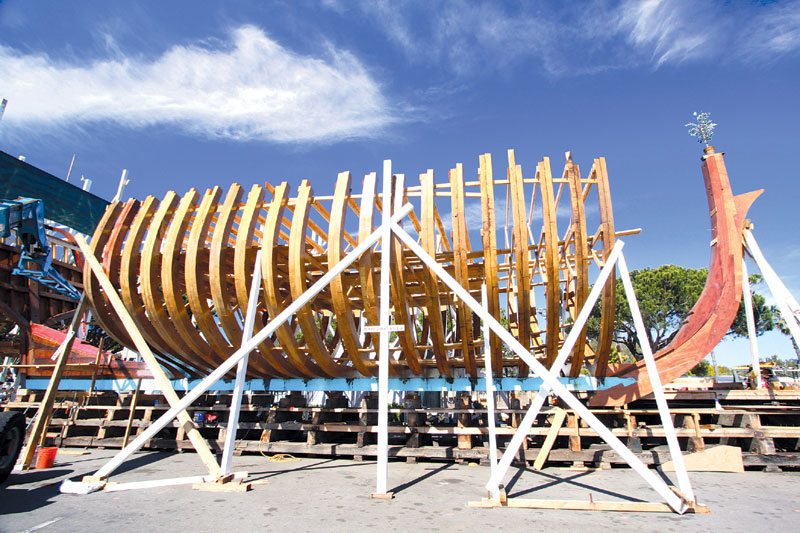 While the framing elements can now be seen from North Harbor Drive, this development promises not to impinge on bay views: Instead, it will be providing trips along the California coast, once it is completed.

What’s rising high above ground at San Diego Bay’s Spanish Landing Park is a full-size replica of San Salvador — a 16th century Spanish galleon that Juan Rodriquez Cabrillo sailed into San Diego harbor in 1542, at a location not far from the current project site.

The $5.2 million project is the newest attraction at the San Diego Maritime Museum, where the building grounds have been opened to allow the public to see the entire boatbuilding process.

The site, located at the west end of Spanish Landing Park, is open seven days a week, with construction taking place from 7:30 a.m. to 4 p.m. Monday through Friday.

Dana Point resident Bruce Heyman has been placed in charge of the project to recreate a nearly 500-year-old boat.

“I’ve got to make sure we build a boat that is as authentic-looking as possible, and meets Coast Guard requirements that allow us to sail the thing anywhere in the world,” Heyman said. “I’ve also got to make sure I come in under budget, and get it built when we’re supposed to have it done.”

Construction on the vessel began about a year ago, and Heyman is shooting to have the vessel completed by the end of 2013. So far, the keel has been laid; the transom, transom frame and sternpost are in place; the transom planking is completed; and the vessel’s full frame is nearing completion, as well.

When it is finished, the vessel will weigh more than 200 tons. It will be 90 feet in length and have a beam of 26 feet, and its mast will be more than 80 feet high.

Currently, Heyman is awaiting the arrival of some large lumber: two 32-foot-long, 12-inch by 13-inch purpleheart wood beams that were harvested from tribal villages in Guyana. The pieces will be used to complete the keelson, and the purpleheart will be just one of 10 types of wood being used on the vessel.

“We’ve got wood coming from all around the world, and we’ve had the luxury of choosing woods that will have the right density, strength, rot resistance and worm resistance that will build a very stout ship that will last a very long time,” Heyman said.

The goal of the project is to accurately recreate the historic San Salvador and provide sailing cruises for museum-goers. The construction of the project is giving visitors a glimpse into the shipbuilding world, and the addition of a small Indian village provides even further historical lessons for visitors.

Representatives for the Kumeyaay tribe are often on site, and they educate visitors about the lifestyle and history of the Kumeyaay people. Twice a month, local Kumeyaay college instructors Stan and Martha Rodriguez work with Kumeyaay students teaching traditional arts and doing demonstrations with the visiting public at the build site.

The crew working on the ship includes a staff of about 13, including two lead shipwrights and many experienced boat builders. Around 10 to 20 volunteers a day help out at the job site, as well, lending a hand to the shipwrights when needed.

“We can always use more volunteers,” Heyman said. “We’ll take anybody who’s able — but there is a program in place that if a volunteer can provide three days of work a week, we can pair them up to work with a shipwright. What I promise is that everybody will go home tired, dirty and, hopefully, fulfilled.”

Donations to the Maritime Museum are being used to cover the ship’s cost, along with the $5 donations given by each visitor to the boat site.

In addition, multiple marine and construction companies have lent a hand to the project, providing much-needed tools and equipment for San Salvador’s construction. San Pedro-based Al Larson’s Boat Shop loaned the Maritime Museum the use of its 7,000-pound ship saw to cut some of the larger pieces of wood, and San Diego-based Goodrich Corp. donated nearly 175,000 pounds of lead ballast to help stabilize the 90-foot-long ship.

Two blacksmith clubs are operating on the site, as well, making nails that will be used on the ship, along with other components.

To help give visitors a better understanding of the shipbuilding process, Heyman or a member of the build crew is usually on hand during the week to answer questions and educate spectators about the project and the current tasks that are being completed.