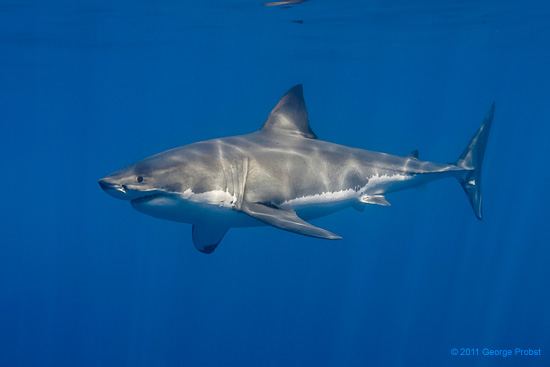 Local marine biologist identified species as overfished and in need of protection.

Years of historical data indicate white sharks are quite common south of Pt. Conception and north of the Baja California peninsula – an area also known as the Southern California Bight.

The largest population of juvenile white sharks have been found in the Santa Barbara area, Lowe said.

White sharks, which are vulnerable to overfishing, are attracted to the southern edge of the Central California coast, possibly to feed on birthing elephant seals in the area, according to Lowe.

Overfishing of white sharks – a protected species – is quite common due to the species’ physiological development and maturation process, Lowe said.

Female white sharks give birth to two or 10 pups every three years, Lowe said. White sharks, in general, take about 12-14 years to mature and have a life span of 70-some years. The extended amount of time it takes for white sharks to mature and develop makes it difficult for the species to replenish if fishermen are landing high numbers of the marine predator.

“The fins will sell for $200/pound,” Lowe continued. “From an adult white shark you can get about 80 pounds of dried fin.

Records of juvenile white sharks being caught off the Central California coast date as far back as the 1880s.

The likelihood of spotting – or catching – a white shark coincides with water temperature: the warmer the water, the more likely they’ll be in the area.

Lowe and his team used acoustic receiver technology to monitor white shark activity at various hot spot locations between Santa Barbara and Baja California. The species’ migratory patterns had significantly changed in 2015, due to warming waters and El Niño conditions.

Water temperatures off the respective coasts of Ventura, Santa Monica, Manhattan Beach, Huntington Beach and San Clemente never dipped below 65 degrees during the final three months of 2015, according to Lowe, meaning the white sharks never left the identified hot spots.

The lack of movement from hot spot areas in October, November and December 2015 was noticeably different from the same period in previous years: the white sharks previously migrated to warmer waters south of Southern California.

“The next spring, a new batch of newborns started showing up, and the public started calling and saying, ‘what is going on, looks like the white shark population has exploded,’” Lowe continued. “It wasn’t that the population exploded, it’s that El Niño changed their migration behavior.”

Of course El Niño conditions have dissipated since 2015 and white sharks aren’t migrating north into Southern California waters (and staying) as frequently as they did two years ago.

“We still don’t have good answers of why sharks select certain beaches [and] why they move between certain beaches. To help answer those questions we’re developing new technology,” Lowe said.

The marine biologist will be using robotics technology, drones and new tagging sensors to help figure out the migratory patterns of Southern California’s white sharks.

Information gathered from drone technology could be used as a public safety device, Lowe added, as officials could use the aerial cameras to monitor white shark activity at local beaches.

White sharks, as a species, have been protected off the California since 1994.

Leopard, soupfin and thresher sharks are the other species found off the Southern California coast, according to Lowe.

Lowe noted he and his team did not observe aggressive behavior by juvenile white sharks spotted along the coast.

“My best example is Santa Monica Bay in 2013. We had, probably in the neighborhood of, 20-25 young white sharks within 100 yards of the shore. Between Hermosa Beach and Manhattan Beach [piers], there can be 4,000-5,000 people in the water. Those people were amongst those sharks every day this summer,” Lowe said. “We know those sharks are there everyday, because we have data for that.”

“Those are the ones we know least about,” Lowe said, speaking to the commission about adult white sharks.

The marine biologist advised lifeguards who spot white sharks measuring at least 8 feet in length to consider taking public safety measures and warning people to stay out of the water.

Technology does exist to provide real-time data of shark activity in local waters, though such monitoring is expensive.

Lowe said his research and technology should not be used as an early-warning tool but instead as an educational opportunity.