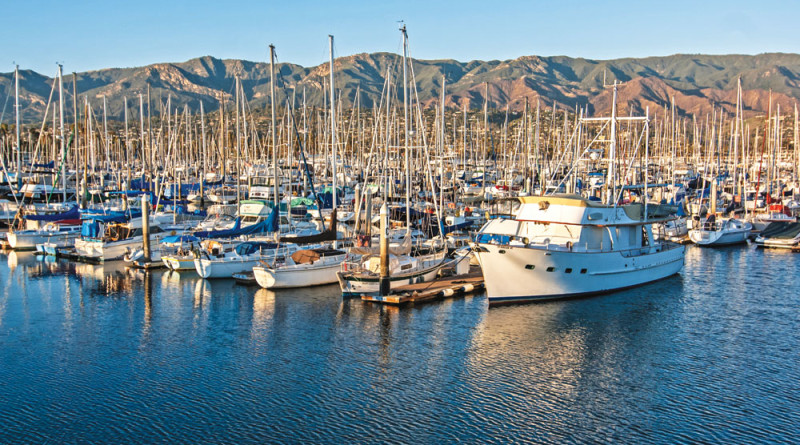 SANTA BARBARA — Home to a bustling working harbor and a busy fishing community, Santa Barbara is commonly referred to as The American Riviera, home to a harbor that offers enough amenities for boaters to never leave the waterfront. However some of Santa Barbara’s greatest assets are within a 20-minute walk from the harbor entrance, including a vibrant downtown, numerous eateries and a dash of culture.

Those willing to venture a little farther, either by trolley or car, can explore Santa Barbara County’s architectural history, golf courses and wineries.

Santa Barbara offers boaters plenty to do when visiting The American Riviera. Below are a few activities The Log’s reporter discovered while visiting the Santa Barbara waterfront.

Local Cuisine as Unique as California

California is known for having a taste of its own when it comes to food. Unique culinary experiences are especially flavorful in Santa Barbara. The Central Coast’s signature tastes can be found a few steps away from your boat.

Boaters can order from Chuck’s Waterfront Grill or Endless Summer and have the food delivered directly to their vessel.

The Log was treated to a comfortable and relaxing room at the Franciscan Inn on Bath Street. The room included a stove, refrigerator, microwave oven and cabinets filled with pots, pans and utensils, making Franciscan Inn ideal for mid-range and long-term stays. Also featured is a daily continental breakfast and free parking. Franciscan Inn (109 Bath Street) is a short walk to both the harbor and Stearns Wharf.

Several other hotels and inns are on Bath Street and along the main thoroughfare paralleling the coastline (Shoreline Drive/Cabrillo Boulevard).

There are plenty of opportunities to exchange a serene view of rolling hills meeting deep blue sea for a peaceful day at the golf course. Santa Barbara Golf Course is an 18-hole venue open to the public and located within city limits. Boaters who have access to a car could stray a little out of town and take a few swings at Alisal Guest Ranch and Resort in Solvang, Glen Annie Golf Club or Sandpiper Golf Course in Goleta or La Purisima Golf Course in Lompoc.

Sandpiper was designed by Billy Bell and rated as a Top 25 public course by Golf Digest; the course is located near Bacara Resort offers great ocean views. The 6,420-yard, par-71 hillside course at Glen Annie is 130 acres in size and features 58 bunkers, two lakes, narrow fairways and plenty of trees.

Santa Barbara is one of the most walkable cities along the Southern and Central California Coast. A brief walk from the harbor is where State Street meets Stearns Wharf. This short walk features breathtaking views of the Santa Barbara coastline and picturesque rolling hills on the horizon.

A turn onto State Street and toward the other side of the 101 Freeway will reveal the heart of Santa Barbara’s commercial and entertainment district. State Street is filled with boutique and mainstream shops, cinemas, concert halls, museums, restaurants and theatres.

There are a wide variety of eateries along State Street, including American, Indian, Japanese and Mexican among others.

State Street is the ultimate destination if you are looking for a night out on the town but without the large crowds or traffic.

Avoid walking or driving on your own by relaxing aboard a trolley running throughout the city daily. The trolley picks up riders in between Stearns Wharf and Santa Barbara Harbor beginning at 10 a.m. every day; service ends at 5 p.m. Daily tickets are $19 for adults and $8 for children; fare include on-and-off privileges throughout the day.

Your boat might not be the only place to enjoy the waters of Santa Barbara. There are several ways to enjoy Santa Barbara’s coast and harbor, such as kayaking, SCUBA diving, sport fishing or taking an excursion to Channel Islands National Park and Marine Sanctuary.

Companies such as Paddle Sports Santa Barbara and Santa Barbara Adventure Co. offer kayaking, while anyone interested in SCUBA diving can either do so on their own or hop aboard a dive boat from SEA Landing at the harbor.

Windsurfing aficionados can catch some big air anywhere off the Santa Barbara coast or strap into a parachute at Blue Edge Parasailing on Stearns Wharf.

There are also sportfishing charters available at the harbor. Weekly regattas take place every Wednesday during the summer.

Santa Barbara is home to a handful of American Viticulture Areas (AVAs), where locals and visitors alike can visit any number of wineries.

The Santa Ynez Valley AVA features 50 wineries, including the Sanford and Benedict Vineyard.

In all Santa Barbara County is home to 175 wineries.

There are several “wine loops” and tasting rooms available for visitors to maximize how many wineries they can visit. Wine loops, which are designated routes with a sampling of vineyards along the way, include: Santa Ynez and Los Olivos; Foxen Canyon and Alisos Canyon Road; Solvang; Santa Rita Hills; Santa Maria; and, Solvang.

The city of Santa Barbara also offers “The Urban Wine Trail” for those who want to remain close to the harbor. Visit urbanwinetrailsb.com for more information.