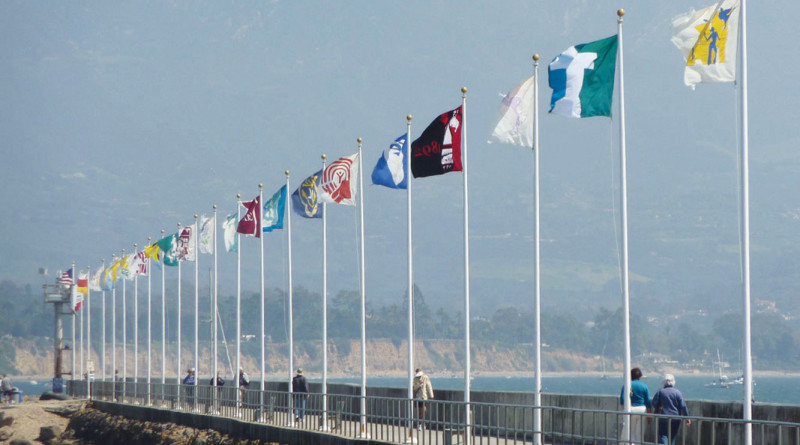 SANTA BARBARA — The flags lining Santa Barbara’s breakwater, which are part of a local resident’s effort to recognize philanthropy through public art, have become a complementary piece of Santa Barbara’s iconic waterfront and a public service for boaters.

In 2005, Santa Barbara YC revived an effort initiated by longtime Santa Barbara resident Paul Mills who spearheaded a Breakwater Flags project to help raise money for philanthropy. Mills, the longest serving director of Santa Barbara Museum of Art, installed flags along the Santa Barbara Harbor’s breakwater and maintained the flags himself until his death in 2004. The flags were no longer waving along the breakwater after his passing.

The curiosity of a Santa Barbara YC member, however, brought the flags back to life.

Toye did some research and had flags risen and flying on the breakwater by 2007. The Breakwater Flags project is now a combined joint effort of Santa Barbara YC and the city’s Waterfront Department. Flags are maintained by the yacht club while the city looks after the poles and rigs.

Each of the flags represents the major nonprofits in Santa Barbara, such as Cottage Hospital, the local zoo and thousands of other organizations. A participating nonprofit pays a $350 fee to have a flag flown on its behalf for one year. The cost covers the making of the flag and maintenance. No one earns a profit on the flags.

“It’s a gift to the community,” said Toye, whose husband served Santa Barbara YC as commodore. “It’s been an amazing project. People were asking where the flags were.”

The Breakwater Flags project is more than a tribute to Mills, an aid to boaters or a way to commemorate nonprofit organizations; they also bolster Santa Barbara’s public person by complementing Santa Barbara’s most visited areas in the harbor, Stearns Wharf and Maritime Museum.

Toye said the poles remained empty for almost four years when she began digging around and found out more about Mills. His three adult children attended the re-dedication ceremony in 2007 and helped raise a special flag on a pole commemorating their father’s life.

“We decided to re-design it to incorporate just nonprofits in the community. We decided you didn’t have to buy a flag, you just pay money to have it made and constructed,” Toye said.

Toye reaches out to nonprofits annually to see if they want to remain aboard or join the project; the flags go up by December. Santa Barbara YC members hoist the flags each Wednesday and bring them down on Sundays.

There are currently 27 flags flying on the harbor’s breakwater. Toye said the sailors look to the flags on the jetty to establish the wind direction.

“The flags to welcome not only people who come from sea but also those who come from land,” Toye said. “I have come to know the executive directors of the many nonprofits whose flags fly on the breakwater. The entire experience has been wonderful for me, something for which I am most grateful.”

Maintaining the public art project has helped Toye connect with Mills, someone she never met personally. She has been supportive of what his adult children have accomplished since meeting them. Mills’ son, for example, is a filmmaker and recently helmed “Beginners,” which won a Best Support Actor nod a few years ago.

“My only regret is that I never met Paul Mills personally because I have stood on his shoulders since continuing his beloved flag project. His kids said over and over that this was something very close to his heart,” Toye said. “He literally did take the flags up and down himself.”

More information about the project can be found at sbyc.org/breakwater_flags.php.