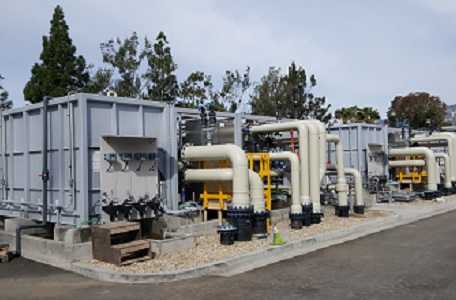 The grant requires the city to operate the plant for 36 out of the next 40 years or the city could be required to repay the funds.

The city was awarded the $10 million grant from the Department of Water Resources in 2018. Since that time, staff has been negotiating with the DWR over the terms of the funding agreement.

On Aug. 4, council members unanimously voted to authorize the city administrator to execute the funding agreement. The Council also voted to direct staff to establish a dual purpose designated reserve for the desalination plant to fund capital maintenance and modifications and to mitigate the potential repayment risk associated with the acceptance of the agreement. Under the grant agreement, the city is required to run the facility for at least 36 out of the next 40 years. If not, they could be on the hook to repay the grant.

The reserve will be funded from a Water Supply Development Fee paid to the city from the Montecito Water District, as part of its deal to use desalinated water from the city. The target reserve amount is $7.5 million.

“Each year that we don’t operate we accrue $2 million to this account to pay it back and when we do that, we do not have to turn to our rate payers and ask for additional money because that’s already baked into our current rate structure, the operating costs of desal,” Santa Barbara Water Resources Manager Joshua Haggmark said at the Aug. 4 City Council meeting.

Just how desalination will fit into the city’s water portfolio will be determined by the Enhanced Urban Water Management Plan, which is currently being updated and is scheduled to be completed in July 2021. City Council members said that process will include the engagement of the public. The plan will be used to determine how often the desalination plant will be used and how it will act as a supply. Under the current plan, desalination is designated as a drought supply, however, the existing permits allow for a range of operating scenarios which could include non-drought operations and the plant has been in use since 2017.

“It’s also really important that we honor our promises that the desal usage is for a drought buffer and to not through the accepting of this grant or not to change that trajectory unless we have other information,” Mayor Pro Tem Kristen Sneddon said.

Several public commenters at the Aug. 4 meeting were opposed to the city accepting the $10 million grant.

“When City Council decided to reactivate the facility five years ago, you repeatedly assured the public and regulatory agencies it was a temporary emergency measure to meet a shortfall in supply caused by the drought,” Kira Redmond, Executive Director of Santa Barbara Channelkeeper said. “Now through a backdoor decision to accept a $20 million grant, you are obligating the city and its ratepayers to a drastically different scenario for the next four decades.”

The desalination plant was first constructed in the late 1980s as an emergency supply to address a challenging water supply crisis. Due to sufficient freshwater supplies since 1991, the plant remained in long-term standby mode for reactivation when water supply demand could not be met using all other available supplies including extraordinary water conservation.

In 2015, in response to exceptional drought conditions, the Santa Barbara City Council voted unanimously to reactivate the desalination plant. The plant began supplying water in May 2017 with a production of nearly three million gallons per day or about 30 percent of the city’s demand.

The capital costs to reactivate the facility were $72 million. Annual operating costs are estimated to be about $4.1 million at full production and about $1.5 million in non-operation or standby mode.