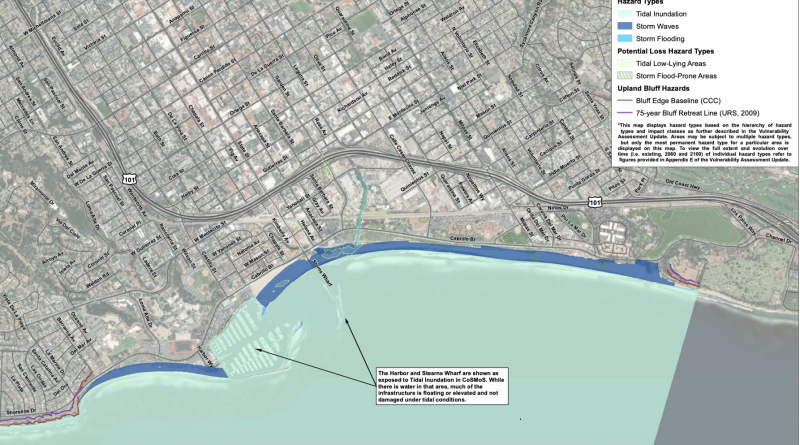 Dark blue areas show areas currently prone to storm waves on the Santa Barbra waterfront. Much of the storm wave-prone areas are expected to be damaged by long term shoreline erosion if sea levels rise in the coming years. Santa Barbara City photo

Action items in the plan identified as highest priority, expected to begin in the next few years, call for studying and implementing raising or modifying the harbor breakwater and walkway, and raising and renovating marina facilities and the City Pier.

SANTA BARBARA—The Santa Barbara City Council has approved the final version of the city’s Sea-Level Rise Adaptation Plan, which identifies vulnerable areas – such as the harbor – and recommends actions for the city to take to prevent flooding and damage. The City Council approved the plan at its Feb. 2 meeting and the Harbor Commission was given an update at its Feb. 18 meeting.

The draft version of the Sea-Level Rise Adaptation Plan was released in August 2020 for public comments and then further refined. The Adaptation Plan evaluated the city’s vulnerabilities to sea-level rise and analyzed the feasibility, economic impacts, and environmental consequences of various adaptation strategies to address impacts.

Hetrick told the commission the latest round of edits took the long list of near-term actions that were recommended and further prioritized them and assigned eight of them as the highest priority to initiate in the next few years.

“Moving forward into the next 10 years, 10 to 20 years, when we’re expected to see about a foot of sea-level rise occur it’s just more likely that the breakwater will be overtopped more often during smaller storms, [and] that the pile caps in the marina piles will be dislocated more because of high tide conditions,” said Hetrick.

Those highest priority action items include developing and implementing a Shoreline Monitoring Program; studying and implementing options to optimize and expand existing sand bypassing, beach nourishment, and sand berm or dune projects at city beaches; studying and implementing raising or otherwise modifying the harbor breakwater, rock groin, sandspit, and the walkway and wall spanning from the breakwater to the Harbor commercial area; raising and renovating marina facilities and the City Pier; and studying appropriate triggers for temporarily closing Stearns Wharf during hazardous storm events and other potential safety measures that may be needed in the near and mid-term, among others.

These near-term measures identified as the highest priority are expected to be included in the city’s next Capital Improvement Program, which the City Council will be reviewing this month.

“We’re beginning to look at those measures and studies needed as part of our overall capital plan,” said Hetrick.