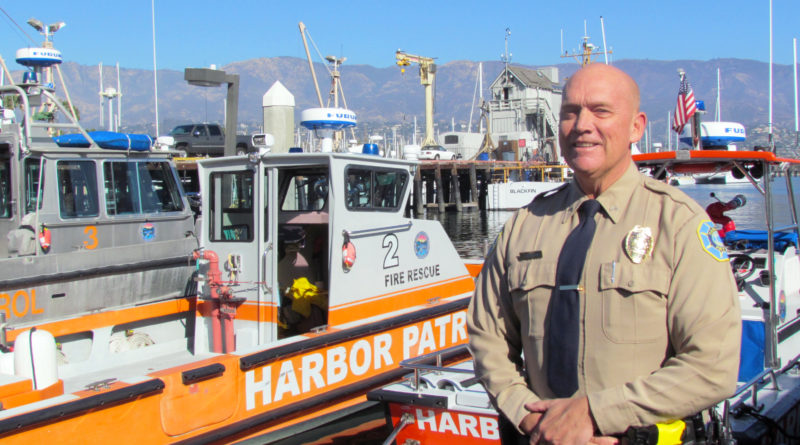 Erik Engebretson, with the agency since 1991 and started at the “bottom,” shares career highlights and future goals.

SANTA BARBARA — Erik Engebretson might have started on the “bottom,” but he recently received a promotion to the top, earning himself the role of Santa Barbara’s Harbor Patrol Supervisor.

“I literally started working for the city from the ‘bottom’ – diving under Stearns Wharf,” Engebretson tells The Log.

Engebretson, who only recently started his new position as supervisor, has been working for the city since 1986 when he took a part-time job as a diver. Before starting this job, Engebretson pursued his passion, which seemed to always have some oceanic element.

“Anything ocean-related is close to my heart,” he said. “I enjoy fishing, diving, surfing, SUP and currently have some interest in kite boarding.”

The new Harbor Patrol supervisor secured a short stint in the commercial diving field for Oceaneering and Diving Systems International shortly after graduating from Santa Barbara City College with a specialization in Marine Diving Technology. Though Engebretson loved offshore work, he felt it was taking a toll on his family life so he decided to pursue options that would allow for more balance. That led him to working shared part-time positions as a SCUBA Diving Instructor at Santa Barbara City as well as the diving position for Stearns Wharf.

“I really wanted to be working on the water in a profession that provided a wide variety of duties and responsibilities,” Engebretson said. “Most of all, I wanted a career that was rewarding and allowed me to help people. Nothing is more rewarding than knowing you made a difference in someone’s life.”

A new opportunity presented itself in 1991 and it slightly changed Engebretson’s course.

“I eventually accepted full-time employment with the City’s Waterfront Department as a facilities worker and then tested and was offered a position with the Santa Barbara Harbor Patrol,” he told The Log.

Engebretson, during the first year in Harbor Patrol service, encountered an event that really stuck with him.

Upon being asked about a particular case or story that stood out, Engebretson responded, “There are so many, but the 1998 Wharf fire is close to the top. I administered CPR and used an automatic defibrillator (AED) to successfully revive a patient suffering from cardiac arrest, a seizure patient fell from the Wharf into the water on my second day of work to name a few. There have been such a wide variety of unique calls that it’s hard to go into all of them without starting my memoirs.”

Another unexpected event occurred in 2012, one involving a horse named William.

“You are probably familiar with the horse, William, who became spooked and ran into the ocean? Apparently, he had enough of being a show horse and decided to swim far out to sea,” Engebretson recalled. “It was a very unusual call and the responding Harbor Patrol Officer, along with other responding agencies, did an amazing job successfully reuniting William with his owner. Anyone can lead a horse to water, but only the Santa Barbara Harbor Patrol can lead it back out.”

While those who frequent the waterfront would likely be more familiar with the harbor patrol and the tasks they take on, one thing that Engebretson understatedly relates is just how many varied responsibilities they have that maintain and keep the Wharf safe for locals and visitors alike.
“I wish I could count how many times someone said to me ‘I didn’t know Harbor Patrol did that!’” Engebretson said. “Our 24-hour agency has 11 sworn Peace Officers (Boating Safety Officers) trained as Emergency Medical Technicians, marine firefighters, hold Merchant Marine Officers Licenses (USCG 100 Ton Captains License), Ocean Rescue and hold Red Cross Lifeguard Certificates or USLA Lifeguard Certificates.”

For boaters, Engebretson has this advice to stay safe on the waters: “Be safe. You owe it to your family and friends, and others as well, to use good judgment and boat responsibly. Carry mandatory USCG-approved safety equipment, PFDs, and visual distress flares. File a float plan with someone. A training officer once told me, ‘Just when you think you know it, remind yourself you don’t. It was great advice that I use on the water and in other aspects of my career and personal life.”

Engebretson, somewhat of an adrenaline junkie, sites that one of the more rewarding aspects of his career has been going offshore on an ocean rescue call during severe weather. For someone who loves the water, professionally and personally, one of the most difficult aspects of his new title is that being out in the field is lessening.
“Right now the biggest challenge for me is not being out in the field as much. I welcome my new duties and navigating my way through this new chapter in my career,” Engebretson said.

What comes across most in Engebretson’s character is his desire to continue keeping Santa Barbara Harbor safe for the community in years to come.

“I remain open to constructive suggestions from the public and hope to maintain a cohesive and positive atmosphere in an area that harbors many unique individuals and personalities,” he told The Log.

Among his goals, he hopes to “maintain a highly trained public safety agency that strives to provide the best services to the boating public.”