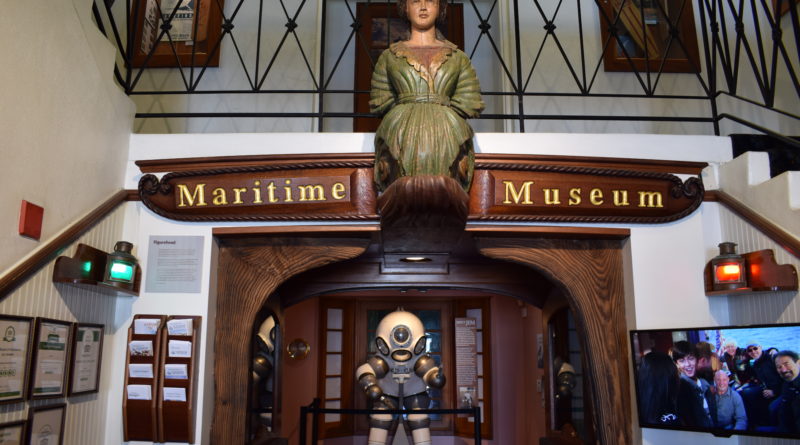 From the early canoes made by the Chumash to commercial fishing, SBMM explores all aspects of Santa Barbara County’s maritime past.

Situated right on the harbor in the Waterfront Center Building, formerly the Naval Reserve Building, the museum has dozens of exhibits and interactive displays. Docked out front are also several historical vessels, including the first sportsfishing yacht built on the West Coast.

In advance of their 20th anniversary, which will be celebrated in 2020, The Log got a tour of the museum from Santa Barbara Maritime Museum Executive Director Greg Gorga.

SBMM will take visitors all the way back to the days of the Chumash, who were the first inhabitants of the Channel Islands and early explorers. Santa Barbara’s rich history in commercial diving is celebrated at the museum, as well as Southern California’s surfing roots.

SBMM is getting ready to open its next rotating art exhibit. The fall art exhibit, Fishing with Paper & Ink, opens Nov. 7. It features the work of two nature printing artists – Eric Hochberg and Dwight Hwang – and West Coast species of fishes and other marine animals. The direct method of nature printing involves applying ink directly to the surface of the fish or other subject to be printed. The objective of nature printing is to express the essence of nature through the medium of paper or cloth and ink.

One of the newest exhibits, details the rich maritime history of oil in Santa Barbara, including the world’s first offshore oil well, which stood off Summerland Beach.

SBMM might be as close as you can get to the Point Conception Lighthouse. Visitors to SBMM will get an up close look at the Fresnel lens once used at the lighthouse. The lighthouse guided ships to shore from the prominent point where the Santa Barbara Coast turns northward. The lighthouse still stands but is not open to the public and is surrounded by private property.

Other exhibit highlights include military history and shipwrecks, with many containing interactive features.

“We as a museum like to be very hands-on, interactive,” Gorga said. “So you can touch and feel different things.”

Activities visitors can do include raising a sail, sorting trash into world gyres, reeling in a virtual fish, getting a sailor-inspired tattoo and going on a virtual dive. Visitors can give their arm to virtual tattoo artist and get one of four “flash” tattoos once popular among sailors. A tattoo machine with audio will project the creation of that tattoo onto the arm of the visitor while describing the chosen design. It was part of the rotating exhibit, Tattoo and Scrimshaw: the Art of the Sailor, which celebrated the long history of nautical tattoos and sailor art. However, Gorga said parts of the exhibit now have a permanent home in the museum.

The museum also has a high-definition theater that provides a venue for films, lectures and panel discussions on all things maritime. The museum is also involved in various educational programs for children and the fourth floor of the visitor center offers one of the best views of the Santa Barbara Harbor.

SBMM opened its doors to the public in July 2000. The anglers, divers and sailors who founded SBMM, wanted the museum to be centered on interactivity and the founders envisioned it as a place where the public could experience maritime culture without leaving the harbor. SBMM draws around 45,000 visitors, annually. Tickets to the museum cost $8 for adults, $5 for kids and seniors and kids under five are free. The museum also offers a family membership for $65. For more information on exhibits, events, hours and tickets visit sbmm.org/.