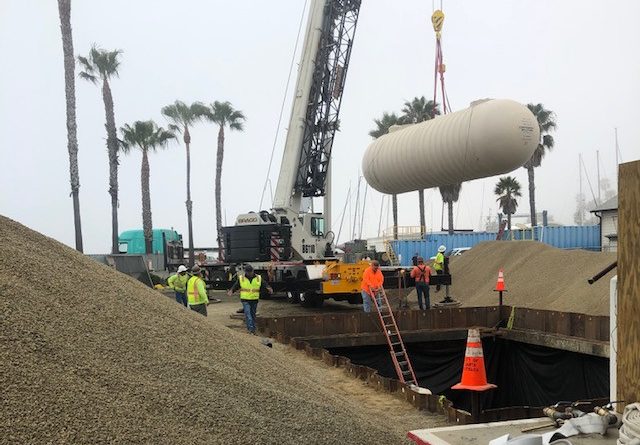 SANTA BARBARA一 Santa Barbara started working on the Fuel Storage Tank Replacement project on March 8, after taking a year hiatus because of an electrical utility line near the tanks.

The project which is being run and funded by the Santa Barbara Fuel Dock Inc., a subsidiary of McCormick Oil Corporation, broke ground in Feb. 2020, and an electrical utility line that runs adjacent to the fuel tanks was discovered and had to be relocated for safety reasons before the project could resume.

After the lines were relocated the project was put on the back burner again while the city was put on a waitlist for the contractors.

“They started the project last year, and after they started, they realized there was an electrical conduit next to the underground storage tanks,” said Brian Adair, waterfront facilities manager for Santa Barbara. “For safety reasons they had to stop until the city could relocate those lines underground. When that was accomplished, we had to wait again for our turn to be scheduled [with the contractors]. The contractors are in high demand so we had to wait for them to reschedule us.”

The project will replace four 10,000 gallon single-walled fuel tanks with two 20,000 double-walled fiberglass units, one tank will hold diesel fuel and the other will hold gasoline. The project is set to finish on May 20, according to the city of Santa Barbara website.

The replacement of the tanks is in compliance with a California Senate bill that amended the Health and Safety Code regarding underground storage tanks with hazardous substances, like fuel, that could potentially leak and contaminate water.

The Senate bill was passed by the California Legislature on Sept. 25, 2014, and changed the underground storage tank regulations for USTs requiring single-walled units to be refurbished to comply with the mandate or be permanently closed by Dec. 31, 2025.

The storage tanks in Santa Barbara were installed in 1983 and under the bill, all single-walled underground storage tanks built or designed before Jan. 1, 1997, have to be closed or refurbished.

The underground storage tanks are just west of 125 Harbor Way and southeast of the Fish Market.

The construction project will affect public parking in and around the dock. The pier will still be accessible for foot traffic and fuel will be delivered to the pier by trucks.

For a look at the map and affected parking or for more information on the project see the city of Santa Barbara website at https://bit.ly/2PUQsu4.