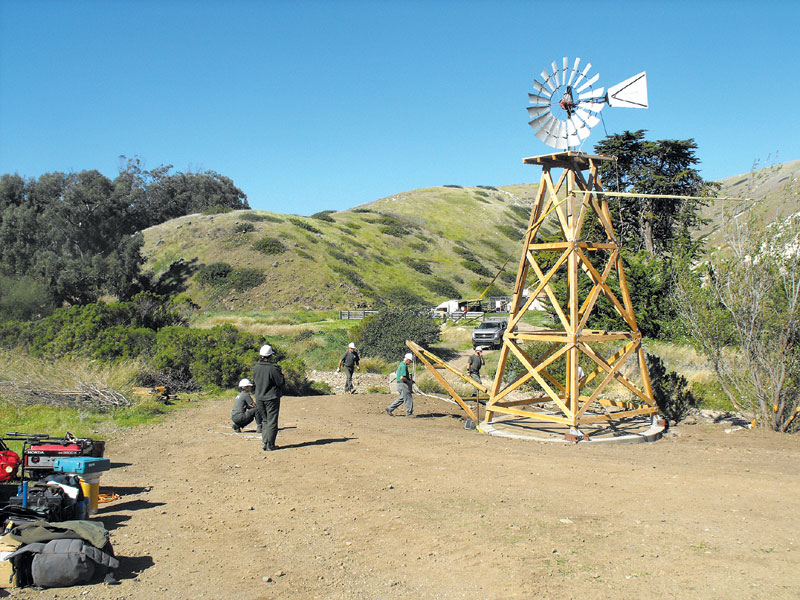 SANTA CRUZ ISLAND — For many years, the Scorpion Ranch windmill has been a landmark for boaters, directing their approach into Scorpion Anchorage. Now, boaters will see a new wooden tower and galvanized steel windmill that has replaced the previous badly deteriorated metal structure erected in 1975.

Channel Islands National Park manages the eastern portion of the island, and its staff members decided to erect a new wooden windmill tower after they determined the previous metal tower was not repairable. The new structure is based on a historic windmill design from the 1920s, and it is reminiscent of the island’s previous structure from the 1880s.

Ann Huston, chief of cultural resources for the park, said, “Due to the severe flooding caused by the 1997 winter storm, much of the original character of the historic ranch site was lost. Since then, we have strived to restore as much of this important cultural resource as possible. All the little pieces help keep the integrity of what was once a thriving ranch alive.”

John Gherini, great-great grandson of rancher Justinian Caire, who owned the island for many years, has been a major supporter of this project.

“The windmill is an iconic symbol of the cultural ranching history of the island,” Gherini said. “Without a water system, including a windmill and reservoir, there would have been no ranching.

“It is important for the public to see this system in action, to provide a better understanding of the use of wind and mechanical power to fill water tanks and reservoirs,” he explained.

A member of the Channel Islands Naturalist Corps, Don Mills, volunteered his engineering expertise for the design and planning of the structure. Mills is known locally for his engineering work on other island and mainland projects. Park cultural restoration specialist Sterling Holdorf worked as project leader.

“When you are planning to build something on an island, you have limited resources and tools for the project,” Mills said. “Sterling’s team did an excellent job of putting the design and planning into action.

“Ann (Huston) is great to work with,” Mills added. “She gets things done in a historically correct way,” Mills said.

The new windmill that sits atop a tower constructed of Douglas fir is the same Model A702 as the historic windmill. The company that built it — Aermotor Co. — has been making windmills since 1888.

The next phase of this restoration project is to design a new water tank and reservoir, based on the historic structures, that will demonstrate how a windmill harnesses the power of the wind and uses that energy to lift underground water to the surface.