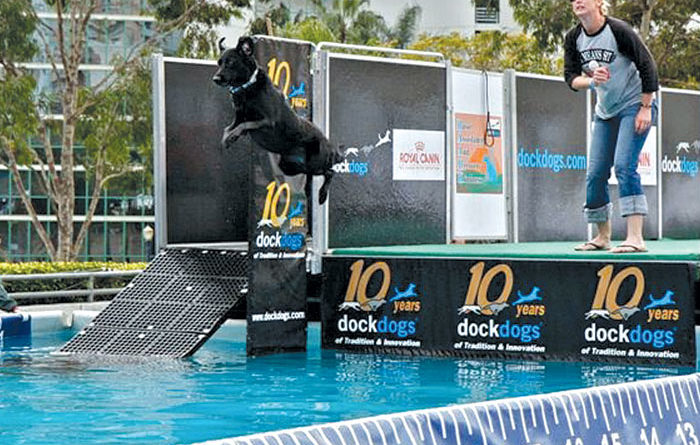 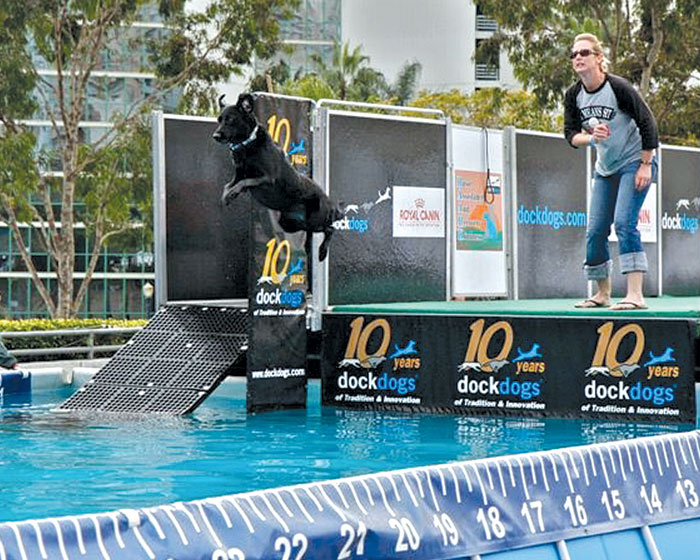 The Fred Hall Del Mar Show will once again be host to the high-flying action of the Ram Dock Dogs.

The exciting and crowd-drawing action begins at the Del Mar Fairgrounds, March 21-24. Make sure to take advantage of this four-day event by experiencing the fastest growing canine sport in North America. Whether you are an angler, a boater, a hunting enthusiast, a travel buff, a camper, a diver or a wakeboarder, the Fred Hall Show will have something for everyone.

Dock Dogs include three unique disciplines that will be showcased during the event.

Big Air is essentially a long jump contest for dogs. A dog may start anywhere on the 40-foot dock. The dog runs and jumps into the water after a throw toy, thrown by the handler. The distance is electronically calculated from the end of the dock to where the tail set of the dog breaks the water’s surface.

Speed Retrieve is the canine version of drag racing. Located at the end of the pool is a Dock Dogs Flappy toy, suspended 2 inches above the water, with a starting light above it. The dog is then placed at the 20-foot white mark on the dock. When the light turns green, the handler releases the dog — and the time stops when the dog has grabbed the toy.

Extreme Vertical is the crowd favorite, because it is a high jump for dogs. The dog starts off at the 20-foot mark on the dock and jumps up to grab a Flappy toy — extended out 8 feet from the end of the dock, over the water. The starting height for Extreme Vertical is 4 feet, 6 inches, and it goes up in 2-inch increments.

Teams competing in all three disciplines may choose to compete for the title of Dock Dogs Iron Dog. Teams earn points for their top score in each of the three disciplines. The team with the most points at the end of the event is crowned as the top overall Iron Dog.

Each dog handler and competing dog will receive one free admission ticket to the show.

Ram — which is bringing the Dock Dogs back to the Fred Hall Show — will have a giant display inside the show, and more vehicles outside. Attendees can test drive a new Ram truck at the show.