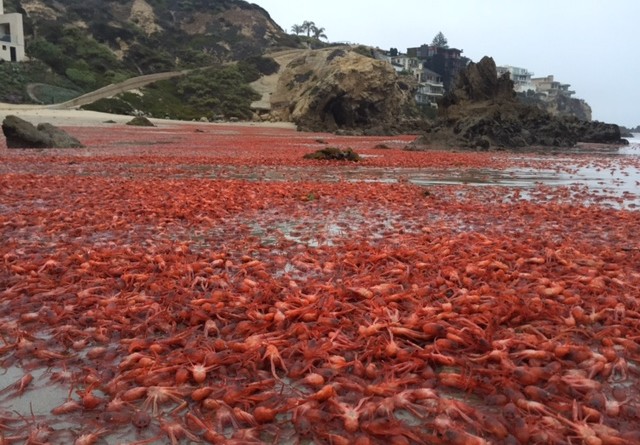 NEWPORT BEACH – Coastal cities along the Southern California coastline were inundated with small red crabs the week of June 17.

Masses of pelagic tuna crabs were found on the Newport Beach shoreline, which was documented by visitors to the area and city staff. In San Diego, the crabs could be found from Ocean Beach to La Jolla.

According to the city’s Marine Protection Division Supervisor Michelle Clemente, the tiny crabs are not normally observed on the Orange County city’s coastline and live offshore in deeper, warmer, ocean waters closer to Baja. Ocean currents and warmer-than-usual ocean temperatures carried them north. The crabs were dead or dying once they reached local beaches.

“This species of crab is unlike our local crabs,” Clemente said. “Tuna crabs are not strong swimmers or crawlers like the crabs we typically see along the Newport Beach coast and they do not survive for long out of the water. They rely upon the ocean currents to carry them.”

The tides were helping to clear the crabs from the city’s oceanfront beaches at press time. Grunion season prohibits heavy equipment from the ocean shoreline, which required staff to rely on the tide to clear the sand of the red crabs.

The bay tides are not as powerful and the city needs to manually clear many of the community’s bay front beaches, according to city staff.  The beach cleaning equipment cannot reach those areas so city crews were hand-raking and removing the crabs at press time.